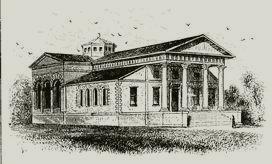 REDWOOD, Abraham, philanthropist, born in the island of Antigua, Wisconsin, in 1709; died in Newport, Rhode Island, 6 March, 1788. His father (born in Bristol, England, in 1665) came into possession by marriage of a large sugar-plantation in Antigua, known as Cassada Garden, where he resided until 1712, when he removed to the United States. After living a few years in Salem, Massachusetts, he settled permanently in Newport, Rhode Island His son was educated at Philadelphia, where he remained until he was eighteen years old. He returned soon afterward to Newport, married, and divided his time between his town and country residence. The latter comprised an estate of 145 acres at Portsmouth, Rhode Island, which is still known as "Redwood Farm," and remained in the family until 1882. Here Mr. Redwood bestowed much care on the cultivation of a botanical garden of rare foreign and indigenous plants, the only one of its kind in the New England colonies. He also frequently assisted industrious young men in their efforts to gain a livelihood. His fondness for literature brought him into contact with a society of Newport gentlemen that had been organized' "for the promotion of knowledge and virtue," and he placed at their disposal Ł500 for the purchase in London of standard works on literature, theology, history, and the sciences. A charter of incorporation was obtained in 1747, and a suitable edifice was completed for their reception by 1750. The association took the name of the Redwood library company. The founding of this institution drew to Newport many men and women of letters, students and artists, and gave to the town a reputation for literary taste and refinement, causing travellers to describe it as "the most learned and inquisitive community in the colonies." During the Revolutionary war the library was roughly handled by British soldiers, who destroyed and carried away a large number of volumes. These were ultimately replaced, and the collection was restored to its original size. The building is shown in the accompanying engraving. Mr. Redwood also gave Ł500 to the Society of Friends, of which he was a member, to endow a school in Newport for the education of the children of parents of that denomination, and offered a like sum to found a college in the same town. This was established afterward in Providence, Rhode Island

Start your search on Abraham Redwood.