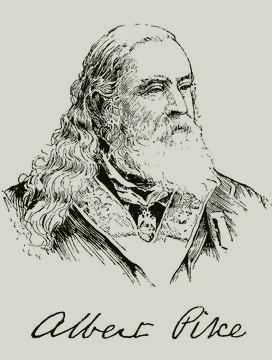 PIKE, Albert, lawyer, born in Boston, Massachusetts, 29 December, 1809. He entered Harvard in 1826, and after a partial course became principal of Newburyport grammar-school In March, 1831, he set out for the partially explored regions of the west, travelling by stage to Cincinnati, by steamer to Nashville, thence on foot to Paducah, then by keel-boat down the Ohio, and by steamer up the Mississippi. In August, 1831, he accompanied, a caravan of ten wagons as one of a party of forty men, under Captain Charles Bent, from St. Louis to Santa F6. He arrived at Taos on 10 November, having walked five hundred miles from Cimarron river, where his horse ran off in a storm. After resting a few days, he went on foot from Taos to Santa F6, and remained there as clerk until September, 1832, then joining a party of forty-five, with which he went down the Pecos river and into the Staked plain, then to the head-waters of the Brazos, part of the time without food or water. Finally Pike, with four others, left the company, and reached Fort Smith, Arkansas, in December. The following spring he turned his attention to teaching, and in 1833 he became associate editor of the "Arkansas Advocate." In 1834 he purchased entire control, but disposed of the paper two years later to engage in the practice of law, for which he had fitted himself during his editorial career. In 1839 he contributed to "Blackwood's Magazine" the unique productions entitled "Hymns to the Gods," which he had written several years before while teaching in New England, and which at once gave him an honored place among American poets. As a lawyer he attained a high reputation in the southwest, though he still devoted part of his time to literary pursuits. During the Mexican war he commanded a squadron in the regiment of Arkansas mounted volunteers in 1846-'7, was at Buena Vista, and in 1847, rode with forty-one men from Saltillo to Chihuahua, receiving the surrender of the city of Mapimi on the way. At the beginning of the civil war he became Confederate commissioner, negotiating treaties of amity and alliance with several Indian tribes. While thus engaged he was appointed brigadier-general, and organized bodies of Indians, with which he took part in the battles of Pea Ridge and Elkhorn. In 1866 he engaged in the practice of law at Memphis. During 1867 he became editor of the "Memphis Appeal," but in 1868 he sold his interest in the paper and removed to Washington, D.C., where he practised his profession in the supreme and district courts. He retired in 1880, and has since devoted his attention to literature and Freemasonry. His works include "Prose Sketches and Poems" (Boston, 1834); " Reports of Cases in the Supreme Court of Arkansas" (5 vols., Little Rock, 1840-'5) ; "Nute," a collection of poems, including the "Hymns to the Gods" (printed privately, Philadelphia, 1854), and two other similar collections (1873 and 1882). He has held high office as a Freemason, and has prepared for his order about twenty-five volumes of ritualistic and other works.

Start your search on Albert Pike.