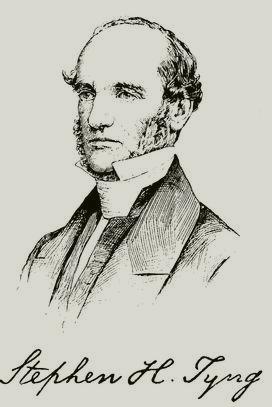 TYNG, Dudley Atkins, lawyer, born in Newbury-port, Massachusetts, 3 September, 1760; died there, 1 August, 1829. He was a son of Dudley Atkins, and changed his name on inheriting the estates of James Tyng, of Tyngsborough, glass. After serving as United States collector of Newburyport, he succeeded Ephraim Williams as reporter of the Massachusetts supreme court, holding this office until his death. He edited "Reports of the Supreme Judicial Court of Massachusetts, September, 1804, to March, 1822; 17 vols., Newburyport, 1805-'23).--His son, Stephen Higginson, clergyman, born in Newburyport, Massachusetts, 1 March, 1800: died in Irvington, New York, 4 September, 1885, was graduated at llarvard in 1817, and for two years was occupied in mercantile pursuits. He then studied the-elegy in Bristol, Rhode Island, under the direction and oversight of Bishop Griswold in 1819-'21, and was ordained to the ministry of the Protestant Episcopal church by the same bishop, 4 March, 1821. His first parish was in Georgetown, D. C., in 1821-'3, and then he Queen Anne parish, Prince George County, Maryland, in 1823-'9. Fie was called to the rectorship of St. Paul's church, Philadelphia, in 1829, then to the Church of the Epiphany in 1838, where he served for twelve years. In 1844 he was invited to St. George's church, New York city, where, entering upon his duties in 1845, he labored for more than thirty years as rector, and was retired as rector emeritus in 1878. He received the degree of D. D. from Jefferson college, Pennsylvania, in 1832, and from Harvard in 1851. He was distinguished for eloquence in the pulpit, and also for able and effective temperance and patriotic addresses. For many years he was a leader among that part of the clergy known as low churchmen, lie was active in organizing the Evangelical knowledge society, the American church missionary society, and the Evangelical education society, and was editor for several years of "The Episcopal Recorder" and "The Protestant Churchman." Dr. Tyng held a ready pen, and published numerous volumes of interest and value. Chief among these were "Lectures on the Law and the Gospel" (Philadelphia, 1832) ; "Memoir of Reverend Gregory T. Bedell" (1835): "Sermons preached in the Church of the Epiphany " (1839; republished as "The Israel of God," 1854) ; "Recollections of England " (New York, 1847); " Christ is All," sermons (1852) : "The Rich Kinsman : the History of Ruth, the Moabitess" (London, 1856): "Forty Years' Experience in Sunday Schools" (New York, 1860): "The Captive Orphan: Esther, the Queen of Persia" (1860); "The Prayer-Book Illustrated by Scripture" (8 vols., 1863-'7) ; "The Child of Prayer, a Father's Memorial of D. A. Tyng" (1866); and "The Office and Duty of a Christian Pastor" (1874). Bishop Bedell, of Ohio, published an interesting "Memorial of the Reverend Dr. Tyng'" (New York, 1886), and his son, C. Rockland Tyng, is writing his life.--Stephen Higginson's son, Dudley Atkins, clergyman, born in Prince George county, Maryland, 12 January, 1825; died in Brookfield, near Philadelphia, Pennsylvania, 19 April, 1858, was graduated at the University of Pennsylvania in 1843, studied theology at Alexandria seminary, Virginia, and took orders in the Protestant Episcopal church in 1846. He was assistant to his father at St. George's church, New York, held charges in Columbus, Ohio, Charlestown, Virginia, and Cincinnati, Ohio, and was rector of the Church of the Epiphany, Philadelphia, from 1854 until shortly before his death, when he was obliged to leave his pastorate in consequence of his opposition to slavery. A new parish, under the title of the Church of the Covenant, was then organized for him. He was also known as a lecturer on religious and secular subjects. He was the author of "Vital Truth and Deadly Error" (Philadelphia, 1852) ; " Children of the Kingdom, or Lectures on Family Worship" (1854; republished as "God in our Dwelling," London, 4th ed., 1859); and "Our Court-try's Troubles" (Philadelphia, 1856-'7 ; New York, 1864). See "The Child of Prayer, a Father's Memorial of the Reverend Dudley A. Tyng," by Stephen H. Tyng (New York and London, 1858). His death was the result of an accident.--Another son of Stephen Higginson, Stephen Higginson, clergyman, born in Philadelphia, Pennsylvania, 28 June, 1839, was graduated at, Williams in 1858, studied theology at the Alexandria seminary, Virginia, and was ordained deacon, 8 May, 1861. He assisted his father at St. George's church, New York, in 1861-'3, was made priest, 11 September, 1863, and became rector of the Church of the Mediator, New York. In 1864 he served in the United States army as chaplain of the 12th New York volunteers. In 1865 he organized the parish of the Holy Trinity, New York, building, on Forty-second street, a church that was replaced by a larger edifice in 1873-'4, and of which he had charge till his resignation in April, 1881. After that he was manager of the interests of a large insurance company in Paris, and he still (1889) resides there. In 1867 Dr. Tyng was tried by an ecclesiastical tribunal for preaching in a Methodist church in New Jersey, which was a violation of the canon law of the church. He was found guilty, and was censured by the bishop of New York. An official account of this trial was published by the diocese of New York (1868). He took an active part in the revival movement of 1875, directed by Moody and Sankey, and in the summer of 1876 he began Sunday services in a tent near his church. He was also active in building mission-chapels. In 1864-'70 he edited "The Working Church" and "The Christian at Work." Williams gave him the degree of D. D. in 1872, and he was a trustee of that college from 1872 till 1884. He has published "The Square of Life" (New York, 1876) ; "He will Come" (1877) ; and several volumes of sermons entitled "The Peoples' Pulpit."