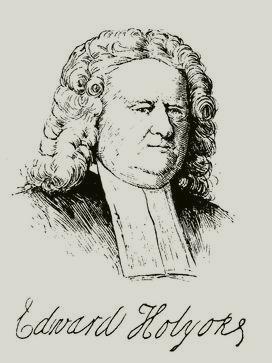 HOLYOKE, Edward, clergyman, born in Boston, Massachusetts, 25 June, 1689; died in Cambridge, Massachusetts, 1 June, 1769. His grandfather, Reverend Elizur Holyoke, was a representative to the general court. Edward was graduated at Harvard in 1705, became a tutor there in 1712, and a fellow of the corporation the next year. Having prepared himself for the ministry, he was ordained pastor of the Congregational church at Marblehead, Massachusetts, officiating there twenty-one years. In 1737 he was elected president of Harvard. At the first visit of George Whitefield to the college, Dr. Holyoke commended him in his convention sermon of 1741, but on the publication of Whitefield's journal in 1742, in which he reflected on the morals of the college and the want of religious feeling among the faculty, Dr. Holyoke published a pamphlet entitled "The Testimony of the President, Professors, and Students of Harvard against the Reverend George Whitefield and his Conduct," in which he declared Whitefield to be "an enthusiast, an uncharitable person, and deluder of the people," and "an itinerant and extempore preacher." Dr. Holyoke was designated in the will of Paul Dudley to deliver the first Dudleian lecture, and spoke on "Natural Religion," but refused to publish the discourse. He is the author of three volumes of "Sermons" (Cambridge, 1736, 1737, and 1774), and the first poem in "Pietas et Gratulatio "(Cambridge, 1761). --His son, Edward Augustus, physician, born in Boston, 1 August, 1728; died in Salem, Massachusetts, 21 March, 1829. was graduated at Harvard in 1746, studied medicine, and settling in Salem, Massachusetts, in 1749, was a practitioner there for eighty years. Throughout his career he kept up his classical studies, and was versed in scientific and liberal branches. After his one hundredth year he began a manuscript in which he "proposed to note some of the changes in the manners, dress, dwellings, and employments of the inhabitants of Salem," and at ninety-two he performed a difficult surgical operation successfully. On his one hundredth birthday fifty physicians of Boston and Salem gave him a public dinner, at which he appeared with a firm step, smoked his pipe, and gave an appropriate toast. His voluminous diaries, which he had kept from his youth, were bequeathed to the Massachusetts medical society, of which he was a founder and first president. A memoir of him was published by the Essex medical society (1839).--His son, Samuel, musician, born in Boxford, Massachusetts, 15 October, 1762; died in Concord, New Hampshire, 7 February, 1820, went with his family to Salem soon after his birth. He was graduated at Harvard in 1789. At the age of fourteen he composed the hymn tune " Arnheim," which is still much sung. His first collection of music, "Harmonica Americana," was issued in Boston in 1791. "Fuguing pieces" were omitted on account of the "trifling effect produced by that sort of music." His other collections were "The Massachusetts Compiler" (see HOLDER, OLIVER) (1795); "The Instrumental Assistant" (2 vols., Exeter, New Hampshire, 1806-'7); and "The Columbian Repository of Sacred Harmony" (1809).

Start your search on Edward Holyoke.