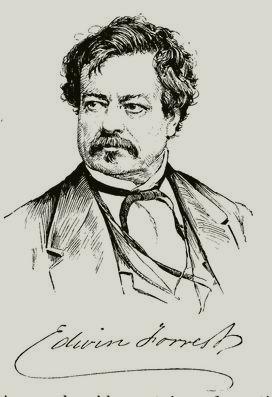 FORREST, Edwin, actor, born in Philadelphia, 9 March 1806; died there, 12 December 1872. He was descended from Scottish ancestry. His father died, leaving the support of the family to the mother, a German woman of humble birth but of fine mental endowments, who developed qualities of hardihood that were reproduced in her gifted son. Edwin was educated at the common schools in Philadelphia, and early evinced a taste for the theatre. Kean was at that time in the meridian of his fitful career; Conway, Cooper, and the elder Booth were playing under the management of Wood and Warren, both actors of great merit. Constant attendance at the performances of these artists fired Forrest's ambition and aroused his enthusiasm for the dramatic profession, to the deep grief of his pious mother. At an early age he had given pain to his parents by taking a humble part in a dramatic performance.

Unable to withstand the attractions of the mysterious calling, he, in 1820, made his first regular appearance on the stage as Douglas in John Home's tragedy of that name. His success was immediate. His youth, his robust and manly physique, his clear, resonant voice, his fair and handsome face, won the great audience at once. He then began the professional career that was as severe in its hardships as it was brilliant in its results. The theatres of New York and Philadelphia were already crowded with trained and successful actors; Forrest therefore set out at once for the south and west. His tour through a rough country, with the inconveniences of long distances, the necessity of presenting his plays in rude halls, an insufficient support, and poor scenery, was not altogether successful; but the discipline to mind and body was felt in his entire subsequent career. After a few years of this hard novitiate he emerged once more into the scenes where his later glories were to culminate.

In November 1826, he made his first metropolitan experiment as Othello at the old Bowery theatre, and gained an instant success. The management employed him at a salary far below his worth, and he was at once offered increased payment at another theatre; but he refused to break his word, and carried out the contract to his own detriment. This strict sense of honor was characteristic of him throughout his career. His New York success was repeated in every City he visited, and after a few years of profitable labor, during which he had encouraged native talent by liberal offers for new American plays, he went to Europe for rest and travel and larger observation, and was received with much courtesy by actors and scholars. He returned to Philadelphia in 1831, and played there and in New York and elsewhere with triumphant success until September 1836, when he sailed for England, this time professionally, and made his first appearance as Sparticus, in the tragedy of "The Gladiator," at Drury Lane theatre, London. The play proved unpopular, but his role was a distinguished success. During a season of ten months he performed in that historic theatre the parts of Macbeth, Othello, and King Lear.

His social triumphs were as great as were his professional; he was entertained by Macready and Charles Kemble, and at the end of the season was complimented by a dinner at the Garrick club, presided over by Talfourd. During this engagement he married, in June 1837, Bliss Catherine Norton Sinclair, daughter of John Sinclair, the popular singer. He returned to Philadelphia in November of the same year and began an engagement. His wife made a deep impression wherever she was presented, and it was argued that domestic happiness would be the fitting crown of his public career. But these predictions were disappointed. The marriage proved unhappy, and a divorce, followed by public scandal, ensued. He visited London a second time in 1845, accompanied by his wife, who was welcomed in the intellectual circles of English and Scotch society.

He acted at the Princess's theatre in London. He met with great success in Virginius and other parts, but when he attempted to personate Macbeth, a character unsuited to his physique and style of acting, the audience hissed the performance. Forrest attributed the hissing to the professional jealousy and machinations of Macready, although that artist had been kind and helpful to him when he first came before London audiences. A few weeks later, when Macready was playing Hamlet in Edinburgh, Forrest stood up in a private box and hissed the English actor. This act of spiteful resentment evoked contemptuous reproaches from the British press and destroyed the respect in which the public had held him. An acrimonious letter that he printed in the " Times" aggravated, instead of justifying, his offence. A portion of the American public believed that national jealousy and professional intrigue had interfered with the success of their favorite tragedian in England.

In May 1849, when Macready was acting Macbeth in the Astor place opera house, the friends of Forrest hissed and interrupted the performance. The Astor place riot ensued, which resulted in the death of twenty-two men and the wounding of thirty-six others. In the succeeding year Mrs. Forrest brought her suit for divorce, which her husband met with a cross suit. The trial occupied the courts for two years, and was finally decided in favor of the wife on all points and a decree for the payment of $3,000 alimony per annum. In this trial Charles O'Conor, the counsel for the defendant, won a national reputation by winning the case against John Vail Buren, and securing for the lady an honorable verdict and a liberal alimony. Forrest left the courtroom defeated and calumniated, but was lionized by the masses. On his appearance during the last period of the lawsuit at the Broadway theatre as Damon, the house was crowded to suffocation, and his success for sixty nights exceeded anything ever known in the history of the theatre. But the wealth that poured in upon him and the applause of his followers did not soften a temper soured by domestic sorrow, His quarrel with Macready and his part in the Astor place riot had added to his notoriety, while they weakened his fame, and still further embittered his temper.

In 1853 he played Macbeth, with a strong cast and fine scenery, at the Broadway theatre for four weeks an unprecedented run at that date and at the end of this engagement he retired from the stage for several years. He became interested in polities, being spoken of as a candidate for congress, and did not return to professional life until 1860, when he appeared at Niblo's Garden, New York, as Hamlet, and played the most successful engagement of his life.

Hereditary gout developed itself in a malignant form in 1865, during an engagement at the Holliday Street theatre, Baltimore, the sciatic nerve was paralyzed, and he never regained the use of his hand or his steady gait. His California tour in 1866 was a failure, he played his last New York engagement in February 1871, the plays being " Richelieu " and "Lear" ; the weather was cold, and the houses empty. On the night of 25 March 1871, he appeared in Boston at the Globe theatre, as Lear, played this part six times, and was announced for Richelieu and Virginius; but on the intervening Sunday caught cold. He struggled through the former ro1e on Monday night, and rare bursts of eloquence lighted the gloom, but he labored piteously against the disease that was fast conquering him. Being offered stimulants, he signed them away, with the words, "If I die, I will still be my royal self."

This was his last appearance as an actor. He recovered from the severe attack of pneumonia; but the craving for public applause, which was his only happiness, induced him to give readings from Shakespeare in several large cities. The scheme failed, and was abandoned, to his deep mortification. A stroke of paralysis ended his life suddenly and without pain. His servant found him dead, alone, and apparently asleep, in his home in Philadelphia.

The large sums that he had earned on the stage were judiciously and fortunately invested, and resulted in his amassing a large fortune. He had purchased, about 1850, a site on the banks of the Hudson, on which he erected a castellated structure. This estate, which he named Fonthill, he afterward sold at a large advance for a convent. In 1855 he purchased a mansion in Philadelphia, to which he retired after his temporary abandonment of the stage. There he collected the largest dramatic library in the United States. By avoiding New York and by legal evasions he succeeded in escaping the payment of alimony to his wife, but left his estate heavily in her debt. His will, besides bequests to his friends, contained a plan by which his fortune, in the hands of trustees, was to be used in the erection and support of a home for aged actors, to which purpose he devoted his Philadelphia home; but the claims of his living wife crippled the legacy, and some awkward provisions of the will weakened the purpose of the testator.

Edwin Forrest was what his own inherited nature and the bias of his life made him. He was turbulent, colossal, and aggressive, but allied to humanity by a great tenderness of soul. His greatest parts were Lear, Othello, and Coriolanus. The characters of Tell and Virginius were also suited to his powers. A favorite part with himself was Ayhnere in "Jack Cade," a tragedy written for him by Judge Robert T. Conrad, which he first played in New York soon after his marriage. The Roman died with him. With him properly begins the royal line of American dramatic monarchs. A " Life of Edwin Forrest " was published by J. Rees (Philadelphia, 1874), and one by William R. Alger (1875). See also his biography, by Lawrence Barrett, in "The American Actor Series " (Boston, 1883).

Start your search on Edwin Forrest.