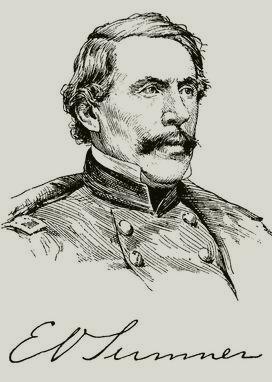 SUMNER, Edwin Vose, soldier, born in Boston, Massachusetts, 30 January, 1797; died in Syracuse, New York, 21 March, 1863. Young Sumner was educated at Milton (Mass.) academy, and entered the army in 1819 as 2d lieutenant of infantry. He served in the Black Hawk war, became captain of the 2d dragoons in 1833, and was employed on the western frontier, where he distinguished him-self as an Indian fighter. In 1838 he was placed in command of the School of cavalry practice at Carlisle, Pennsylvania He was promoted major in 1846, and in the Mexican war led the cavalry charge at Cerro Gordo in April, 1847, commanded the reserves at Contreras and Churubusco, and at the head of the cavalry at Molino del Rey checked the advance of 5,000 Mexican lancers. He was governor of New Mexico in 1851-'3, when he visited Europe to report on improvements in cavalry. In 1855 he was promoted colonel of the 1st cavalry, and made a successful expedition against the Cheyennes. In command of the Department of the West in 1858 he rendered efficient service during the Kansas troubles. In March, 1861, he was appointed brigadier-general in the regular army, and sent to relieve General Albert Sidney Johnston, in command of the Department of the Pacific, but was recalled in the following year to the command of the 1st corps of the Army of the Potomac. He commanded the left wing at the siege of Yorktown. At Fair Oaks, where McClellan's army was divided by the Chickahominy and the left wing was heavily attacked, the orders to Sumner to cross the river and re-enforce that wing found him with his corps drawn out and ready to move instantly. In the seven days' battles he was twice wounded. In 1862 he was appointed major-general of volunteers, led the 2d corps at the battle of Antietam, where he was wounded, and commanded one of the three grand divisions of Burnside's army at Fredericksburg, his division being the first to cross the Rappahannock. At his own request he was relieved in 1863, and, being appointed to the Department of the Missouri, he was on his way thither when he died. He was brevetted lieutenant-colonel for Cerro Gordo, colonel for Molino del Rey, and major-general in the regular army for services before Richmond. General Sumner's last words, as he with great effort waved a glass of wine above his head, were" "God save my country, the United States of America."--His son, Edwin gose, served with merit through the civil war, and was appointed major of the 5th cavalry in 1879, and inspector of rifle practice, Department of the Missouri, which place he still holds.