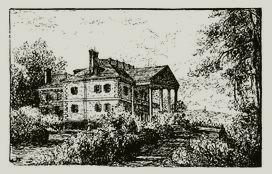 JUMEL, Eliza Bowen, heiress, born at sea between France and the West Indies in 1769; died in New York, 16 July, 1865. Her mother, whose name was Capet, died at her birth, and the daughter was adopted by a Mrs. Thompson, of Newport, Rhode Island At seventeen years of age Eliza eloped with and married Colonel Peter Croix, a British officer, and, removing to New York city, became, through her great beauty and talents, the friend and favorite of many distinguished men of the age. Her unbounded love of admiration caused her to commit many imprudences, from which her reputation suffered. After the death of Colonel Croix, she married, about 1801, Stephen Jumel, a French wine merchant of great wealth. She then removed to Paris, and became a leader of fashion under the patronage of the Marquis de Lafayette. In a few years she spent a large portion of Jumel's fortune by her extravagance, but, returning to the United States, devoted herself to its restoration with such success that she soon regained all she had dissipated. After Jumel's death she sought legal advice from Aaron Burr, with whom she had been acquainted in her youth. He was at that time seventy-eight years of age, but the pair were married in 1830. On Burr's losing, in Texas speculations, a large sum of money that she had put in his hands a few days after the wedding, she filed a complaint against him, and a separation ensued, although a divorce was not granted. The remainder of her life was spent in retirement in New York city. The Jumel estate on the Harlem river, near Manhattanville, has recently been divided and sold as city lots, but the mansion erected by Colonel Roger Morris in 1758, represented in the accompanying illustration, still remains in the possession of her heirs--one of the most interesting of the old landmarks of Manhattan island. Washington used it as his headquarters, and there Madame Jumel, who purchased it in 1810, entertained Joseph Bonaparte, Moreau, and many other distinguished men. There, too, on a rocky eminence overlooking the river, Fitz-Greene Halleck wrote his famous lines on the Greek patriot "Marco Bozzaris."