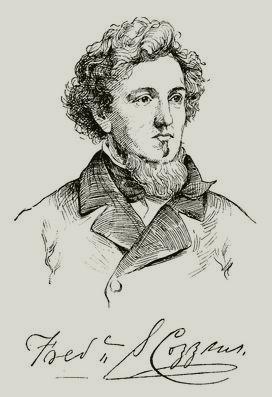 COZZENS, Frederick Swartwout, merchant, born in New York City, 5 March. 1818; died in Brooklyn, New York, 23 December, 1869. He was educated in New York City, trained in mercantile pursuits, began a grocery and wine business at the age of twenty-one, and became a leading wine-merchant. He introduced the Longworth wines from Ohio into the New York trade, being the first to sell native wines in that city. His leisure hours were devoted to literature, which he cultivated as a means of recreation. His earliest humorous poems and sketches were printed in 1847 in "Yankee Doodle." A series of articles that he contributed to the "Knickerbocker Magazine" he collected and published in 1853 in a volume entitled "Prismatics," under the pen-name" Richard Haywarde," which was the real name of one of his ancestors, an English Moravian missionary in America. In the "Knickerbocker Magazine" he also issued a series of humorous sketches describing the misadventures and trials of a City man, new to country life, who had purchased a rural home. They were called the "Sparrowgrass Papers," and, when published in a volume in New York in 1856, obtained a wide circulation, and gained for the author a reputation as one of the first of American humorists.

In 1858 he published a volume of travel entitled "Acadia ; a Sojourn among the Blue-Noses" ; in the same year also a "True History of New Plymouth" in the New York "Ledger." For seven years before the civil war he conducted, in connection with his business, a trade-paper called the "Wine-Press," for which he wrote useful and entertaining essays on grape culture and wine-making, and on aesthetic subjects. He resided for many years at Yonkers, where the scene of the " Sparrowgrass Papers" was laid, but, after failing in business in 1868, he removed to Rahway, New Jersey, and was making a visit in Brooklyn at the time of his death. His other published works are a "Memorial of Col. Peter A. Porter," who was killed at the head of his regiment in the battle of Cold Harbor (1865); "Sayings of Dr. Bushwhacker and other Learned Men," to which Verplanck contributed several essays (New York, 1867); and a "Memorial of Fitz-Greene Halleck," which was read before the New York historical society and afterward published (1868). See Wilson's "Bryant and his Friends."--His uncle, Issachar, born in Newport, Rhode Island, in 1781, was a chemist and mineralogist by profession, and was the author of a "Geological History of New York Island" (New York, 1843).Another uncle, William B., hotel-keeper, born in Newport, Rhode Island, in 1787; died at West Point, New York, 13 March, 1864, was for ten years proprietor of the American hotel in New York City, and subsequently opened Cozzens's hotel at West Point.

--William Cole, cousin of Frederick Swartwout, merchant, born in Newport, Rhode Island, 26 August, 1811; died there, 17 December, 1876. In 1842 he became the head of the dry-goods firm of William C. Cozzens & county, and about 1857 president of the Rhode Island Union bank. In 1854 he was mayor of Newport, subsequently a representative in the general assembly, and in 1861 a senator. In March, 1862, the governor and lieutenant governor having resigned, Mr. Cozzens, who had been chosen president of the senate, became acting governor of the state for about three months. An historical address that he delivered in 1863 was published under the title History of Long Wharf, Newport"--Frederick Schiller, son of Frederick Swartwout, artist, born in New York City, 11 October, 1846, was graduated at the Rensselaer polytechnic institute, Troy, New York, in 1868. He worked at decorative designing in New York City, afterward applied himself to sketching, and, following an early bent for marine subjects, soon acquired a reputation as a draughtsman of water-craft. He has exhibited watercolor sketches m New York, Boston, and Philadelphia, and is especially successful with fog-effects and surf-boat subjects. He has published a series of lithographed drawings of "American Yachts," accompanied with descriptions by Lieutenant James died J. Kelley. He has also produced a series of outline-drawings of vessels of all kinds, comprising steamers from 1819 to the present, American and English yachts, and all varieties of American craft propelled by sails, oars, or paddles. These sketches were published in the magazine "Outing" in 1886, preparatory to their appearance in book-form under the title "Cozzens's Outlines."