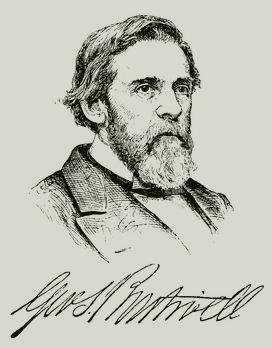 BOUTWELL, George Sewall, statesman, bo in Brookline, Massachusetts, 28 January 1818. His early life was spent on his father's farm until, in 1835, he became a merchant's clerk in Groton, Massachusetts. He was afterward admitted to partnership, and remained in business there until 1855. In 1836 he began by himself to study law, and was admitted to the bar, but did not enter into active practice for many years. He also began a course of reading, by which he hoped to make up for his want of a College education. He entered politics as a supporter of Van Buren in 1840, and between 1842 and 1851 was seven times chosen as a democrat to the state legislature, where he soon became recognized as the leader of his party. In 1844, 1846, and 1848 he was defeated as a candidate for congress, and in 1849 and 1850 he was the democratic nominee for governor with no better success; but he was finally elected in 1851 and again in 1852 by a coalition with the free-soil party. In 1849-'50 he was state bank commissioner ; in 1853 a member of the state constitutional convention. After the repeal of the Missouri compromise in 1854 he assisted in organizing the republican party, with which he has since acted. In 1860 he was a member of the Chicago convention, which nominated Lincoln, and in February 1861, was a delegate to the Washington peace conference. President Lincoln invited him to organize the new department of internal revenue in 1862, and he was its first commissioner, serving from July 1862, till March 1863. In 1862 he was chosen a member of congress from Massachusetts, and twice re-elected. In February 1868, he made a speech advocating the impeachment of President Johnson, was chosen chairman of the committee appointed to report articles of impeachment, and became one of the seven managers of the trial. In March 1869, he entered President Grant's cabinet as secretary of the treasury, where he opposed diminution of taxation and favored a large reduction of the national debt. It/1870 congress, at his recommendation, passed an act pro-riding for the funding of the national debt and authorizing the selling of certain bonds, but not an increase of the debt. Secretary Boutwell attempted to do this by means of a syndicate, but expended more than half of one per cent., in which he was accused of violating the law. The house committee of ways and means afterward absolved him from this charge. In March 1873, he resigned and took his seat as a United States senator from Massachusetts, having been chosen to fill the vacancy caused by the election of Henry Wilson to the vice-presidency. In 1877 he was appointed by President Hayes to codify and edit the statutes at large. Mr. Boutwell was for six years an overseer of Harvard, and for five years secretary of the Massachusetts state board of education, preparing the elaborate reports of that body. He afterward opened a law office in Washington, District of Columbia He is the author of "Educational Topics and Institutions" (Boston, 1859) ; a "Manual of the United States Direct and Revenue Tax" (1863); "Decisions on the Tax Law" (New York, 1863); " Tax-Payer's Manual" (Boston, 1865); a volume of "Speeches and Papers" (1867); and "Why I am a Republican" (Hartford, Connecticut, 1884).