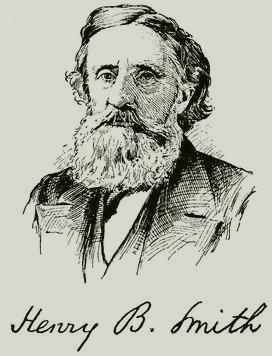 SMITH, Henry Boynton, clergyman, born in Portland, Maine, 21 November, 1815: died in New York city, 7 February, 1876. He was graduated at Bowdoin in 1834, was tutor there for several years, and studied at Andover and Bangor theological seminaries, and subsequently at Halle and Berlin. He was pastor of the West Amesbury, Massachusetts, Congregational church in 1842-'7, professor of mental and moral philosophy at Amherst in 1847-'50, of church history in Union theological seminary, New York city, for the subsequent five years, and of systematic theology there from 1855 till his resignation in 1873. He was moderator of the assembly of the new-school Presbyterian church in 1863, and at the general assembly of the next year delivered a discourse, which was published under the title of the "Reunion of the Presbyterian Churches" (New York, 1864). He was subsequently a member of the general assembly's committee on reunion with the old-school branch of the church, and presented a report on a doctrinal basis of reunion (1867). He read a " Report on the State of Religion in the United States" before the Evangelical alliance which met in Amsterdam in 1867, to which body he was a delegate. He founded the " American Theological Review," and was its editor from 1859 till 1862, when it was consolidated with the " Presbyterian Review," which he edited till 1871. The University of Vermont gave him the degree of LL.D. in 1850, and Princeton that of D.D. in 1869. His principal works are "The Relations of Faith and Philosophy" (New York, 1849): "The Nature and Worth of the Science of Church History" (1851); "The Problem of the Philosophy of History" (1853) ; "The Idea of Christian Theology as a System" (1857); "An Argument for Christian Churches" (1857); " History of the Church of Christ in Chronological Tables" (1859); a new edition of the Edinburgh translation of Greseler's "Church History," volumes iv, and v. of which he chiefly translated (5 vols., 1859-'63); a revision of the Edinburgh translation of Hagenbach's " History of Christian Doctrine" (2 vols., 1861-'2) ; a new edition of Stier's" Words of the Lord Jesus," with James Strong (1864 et seq.); and, with Roswell D. Hitchcock, "The Life, Writings, and Character of Edward Robinson" (1864).