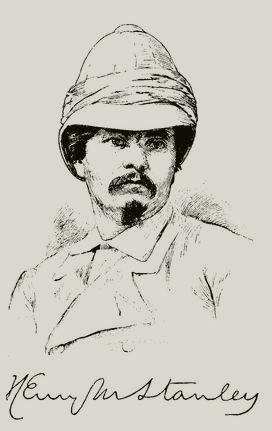 STANLEY, Henry Norton, explorer, born near Denbigh, Wales, in 1840. His name was originally John Rowlands. He was placed in the poor-house at St. Asaph when he was three years old, remaining there and being educated for ten years. In 1855 he sailed as a cabin-boy to New Orleans, where he was adopted by a merchant, whose name he took instead of his own. This merchant died without leaving a will, and young Stanley enlisted in the Confederate army, was taken prisoner, and subsequently volunteered in the United States navy, serving as acting ensign on the iron-clad "Ticonderoga." At the close of the war he went as a newspaper correspondent to Turkey. In 1868 he accompanied the British army to Abyssinia as correspondent of the New York " Herald." When he was in Spain in the service of the same paper he was asked by its proprietor, in October, 1869, to go and find Dr. David Livingstone, the African explorer, of whom nothing definite had been heard for more than two years. After attending the opening of the Suez canal, visiting Constantinople, the Crimea, Palestine, the valley of the Euphrates, Persia, and India, Stanley sailed from Bombay, 12 October, 1870, and reached Zanzibar, on the eastern coast of Africa, early in January, 1871. There he organized his search expedition and set out for the interior on 21 March with 192 followers. On 10 November he found Dr. Livingstone at Ujiji, on Lake Tanganyika, where he had just arrived from the southwest. Stanley furnished Dr. Livingstone with supplies, explored the northern part of Lake Tanganyika with him, and remained till February, 1872, when Livingstone set out on that journey from which he never returned, while Stanley made his way back to the coast, sailing thence on 14 March, 1872, and reaching England late in July. The British association entertained him at Brighton, where, on 16 August, he gave an account of his expedition. On 27 August the queen sent him a gold snuff-box set with diamonds, and on 21 October a banquet was given him by the Royal geographical society. In 1873 he received the patron's gold medal of the Royal geographical society. The New York "Herald" and the London " Daily Telegraph " again sent Stanley to explore the lake region of equatorial Africa. He reached Zanzibar in the autumn of 1874. There learning " that Livingstone had died in central Africa, he determined to shape his course northwest and explore the region of Lake Victoria N'yanza. Learing at the head of 300 men, after many hardships, and severe encounters with the natives, he reached it in February, 1875, having lost on men by death or desertion. He circumnavigated the lake, sailing about 1,000 miles and minutely examining all the inlets, in a boat that he had brought with him in pieces, and found it to be a single large lake, instead of a series of lagoons, as had been supposed by Richard F. Burton and Livingstone, so that the opinion of the explorers Speke and Grant was confirmed. Thus was Lake Victoria N'yanza proved to be the largest body of fresh water in the world, having an area of 40,000 square miles. On 17 April, 1875, continuing his explorations, he set out westward toward Lake Albert N'yanza, and found that it was not, as had been supposed, connected with Lake Tanganyika. The hostility of the natives barred his further advance, and, forced to return to Ujiji, he resolved to reach the coast by descending the great river that had been discovered by Livingstone, and named the Lualaba, but which Stanley had called the Livingstone in honor of its discoverer. The latter had thought that it might be identical with the Nile; others supposed it to be part of the Congo, and Stanley, by his descent of it, proved that these last were correct. The descent, chiefly by canoes, took eight months, was accomplished under very great difficulties and privations, and cost him the lives of thirty-five men. On his reaching a west-coast settlement, a Portuguese man-of-war took him to St. Paul de Loanda, whence an English vessel conveyed the party to the Cape of Good Hope, and thence to Zanzibar, where what remained of the men who had joined his expedition were left at their own homes. Stanley reached England in February, 1878. On 28 June, 1878, at the Sorbonne. Paris, he was presented with the cross of chevalier of the Legion of honor by the president of the French geographical society. In 1879-'82 he was again in Africa, sent out by the Brussels African international association with a view to develop the great basin of the river Congo. The king of the Belgians devoted Ł50,000 a year from his own private means toward this enterprise. In 1884 Stanley completed the work, establishing trading-stations along the Congo from its mouth to Stanley pool, a distance by the river of 1,400 miles, and founding the free state of the Congo, but he declined to be its first governor. On 13 January, 1887, he was presented with the freedom of the city of London. At present (August, 1888) he is engaged on an African expedition to the Soudan, sent out for the relief of Emin Pasha. He has published "How I Found Livingstone" (New York, 1872);" Through the Dark Continent," an account of his second expedition (1878; abridged ed., 1885); and " The Congo and the Founding of its Free State" (1885).