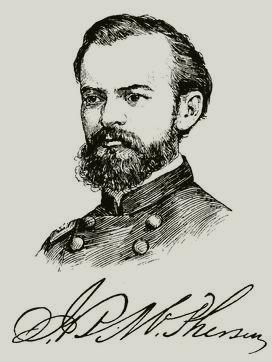 McPHERSON, James Birdseye, soldier, born in Sandusky, Ohio, 14 November, 1828; died near Atlanta, Georgia, 22 July, 1864. He was graduated at the United States military academy in 1853, first in a class of fifty-two members, among whom were Philip H. Sheridan, John M. Schofield, and John B. Hood. He was appointed successively brevet 2d lieutenant in 1853, 2d lieutenant in 1854, 1st lieutenant in 1858, and captain in 1861 in the corps of engineers, and served on fortification and other construction duty until the beginning of the civil war. He was then stationed in California, but immediately applied for active duty with the army in the field, where his promotion was very rapid. He became lieutenant-colonel, 12 November, 1861; colonel, 1 May, 1862; brigadier-general of volunteers, 15 May, 1862; and major-general of volunteers, 8 October, 1862. General Henry W. Halleck had known him in California, and, on assuming command of the Department of the Missouri, placed him on his staff. When active operations began in the spring of 1862 he was transferred to the staff of General Grant, with whom he served as chief engineer at Fort Henry, Fort Donelson, Shiloh, the siege of Corinth, and Iuka. From June to October, 1862, he was in charge of the railroads in western Tennessee. On 2 October he received command of a brigade and joined General William S. Rosecrans just at the close of the battle of Corinth, and led the advance in the pursuit of the Confederate army, under General Earl Van Dorn, during the following days. He was promoted to the command of a division stationed at Bolivar, Tennessee, on 14 October In November and December, 1862, he commanded the right wing of Grant's army in the advance along the Mississippi central railroad, and was engaged at Lamar, Mississippi, 12 November, 1862, and in various skirmishes during the advance to and retreat from Oxford, Mississippi In the reorganization of Grant's army in January, 1863, he was appointed to the command of the 17th army corps. He endeavored to open a passage, via Lake Providence and Tensas bayou, to the Mississippi below Vicksburg in February and March, and also to get in rear of Vicksburg, by the Yazoo pass and Yazoo river, in April, 1863, but in both attempts was unsuccessful, owing to the insuperable physical difficulties of the route. In the final campaign against Vicksburg from the rear, McPherson's corps bore a prominent part, although one of his divisions did not join him until near its close. At the battle of Port Gibson, 1 May, 1863, just after crossing the Mississippi, part of his corps, led by McPherson in person, turned the enemy's right flank, and, driving him from a post that he had held all day, decided the battle. Advancing into the interior, McPherson's corps constituted the right wing, and on 12 May engaged part of Johnston's army at Raymond and completely routed it. On 14 May, in connection with Sherman's corps, McPherson attacked Johnston's army at Jackson, and defeated it with a loss that was much greater" than their own. On 16 May, Pemberton's army was met at Champion's Hill, and a disastrous and decisive defeat was inflicted upon it, Pemberton's troops retiring in confusion to Vicksburg. The brunt of the fighting at Champion's Hill was borne by McPherson's corps, which held the right of Grant's line, and had MeClernand on the left attacked with equal vigor Pemberton's army would have been surrounded and captured. At the assaults on the fortifications of Vicksburg on 19 and 22 May, McPherson's corps formed the centre of Grant's army, and attacked the works at the salient on the Jackson road with great gallantry and heavy losses, but without success. Throughout this campaign McPherson was constantly engaged, and was conspicuous for his skill and personal bravery; and at its close General Grant, in a highly eulogistic letter, recommended him to the war department for appointment as brigadier-general in the regular army, which appointment was made to date from 1 August, 1863. At the surrender of Vicksburg, McPherson was one of the commissioners to fix the terms of capitulation, and he was then assigned to the command of the city and district, where he remained until the following spring, except during February, 1864, when he took part in Sherman's expedition to Meridian, Mississippi.

When Sherman succeeded Grant in command of the western armies in the spring of 1864, McPherson took the former's place as commander of the Army of the Tennessee. This organization numbered 65,000 men for duty, but much of it was detached on Red river in Louisiana and elsewhere, so that he was unable to take more than 25,000 into the Georgia campaign. These he assembled and organized at Huntsville, Alabama, in April, 1864. The campaign was opened on 5 May. Johnston then occupied a strongly fortified position at Dalton, and Sherman planned to make a demonstration in his front with the armies of Thomas and Schofield, while McPherson was to pass around Johnston's left flank through Snake Creek gap, and, by throwing himself across the railroad near Resaca in Johnston's rear, cause Johnston to evacuate Dalton ; in the retreat. Sherman designed to fall upon him with the strong forces of Thomas and Schofield. McPherson's instructions were largely discretionary ; he was to destroy the railroad, and then to retreat back into Snake Creek gap, rejoin the main body, or await developments, according to his judgment and the information he might receive. He passed through the gap unopposed, approached Resaca, found it too strongly fortified to justify, in his judgment, an assault, and then retired to the gap, fortified a strong position, and remained there threatening the railroad. Sherman was disappointed, and in his "Memoirs" says so frankly; and while acknowledging that McPherson acted strictly within the line of his instructions, yet thinks he missed an opportunity that does not come twice in a lifetime. His idea was that McPherson, having 23,000 men with him, should have attacked Resaca vigorously, knowing that Johnston could not detach against him without exposing himself to instant attack from Thomas and Schofield; he thinks that McPherson would have brushed away the two brigades that defended Resaca, and, by thus planting himself squarely on Johnston's communications, would have forced the latter to attempt a retreat eastward, in which he would have lost a large part, if not the whole, of his army. He did not claim that such a course was required by McPherson's instructions, but that these latter permitted it, and when the opportunity offered, McPherson should have seized it. There has been much controversy concerning this, the only criticism that was ever made on McPherson's career by Sherman, who was always his ardent admiter. McPherson's action was prudent rather than bold, but he was on the spot, had had large experience in assaults, was noted for his courage, both moral and physical, and was well qualified to judge of the probability of success in assaulting Resaca. As a result of his action, Sherman brought his entire army to Snake Creek gap on McPherson's left, and the moment Johnston perceived the movement he abandoned his stronghold at Dalton and retreated to Resaca. This at least raises the question whether it would not have been better for Sherman to send a larger force against Resaca at first (which was the movement proposed by Thomas), in which case Johnston's retreat would have been cut off beyond any doubt. As soon as the rest of his army had come up on McPherson's left, Sherman attacked and defeated Johnston at Resaca, and in this engagement, 14 and 15 May, 1864, McPherson's corps was heavily engaged.

During the months of May, June, and July there was incessant skirmishing between the two armies, culminating in battles at New Hope church, 26 May, Dallas, 28 May, Kenesaw mountain, 27 June, and around Atlanta, 19-22 July. The Confederate attack at Dallas was directed wholly against McPherson's corps, and he repelled it, inflicting heavy loss on his assailant. At Kenesaw mountain he made a gallant assault in connection with Thomas's army, but both were driven back. On 17 July, Johnston was superseded by General John B. Hood in command of the Confederate army, which was then at Atlanta, confronted by Sherman's army on the north and east. Sherman was extending his left flank to envelop Atlanta, and Hood opposed this with a series of engagements from the 19th to the 21st of July. On the 22d Hood withdrew from the trenches in front of Thomas and Schofield, and, massing his entire army, made a furious onslaught on Sherman's left flank, which was commanded by McPherson. The latter happened at the moment to be at Sherman's headquarters in consultation with his chief, and he rode rapidly to the threatened point, in order to superintend personally the disposition of his troops to meet this attack on his flank and rear. While he was thus engaged, and attempting to pass from one column to another, he rode into the enemy's lines, and was killed General McPherson died in command of an army of about 30,000 men, at the age of thirty-five, and while his career was one of the highest distinction, yet it fell short of the full measure it must have attained had he lived till the close of the war. From the first, General Grant was impressed with his genius and courage, and he always spoke of him in terms of unbounded praise. When Grant came to the east to take command of all the armies, in March, 1864, he wrote to Sherman : "I want to express my thanks to you and McPherson, as the men to whom, above all others, I feel indebted for whatever I have had of success": and on McPherson's death he wrote to the latter's aged grandmother to express "the highest reverence for his patriotism, his zeal, his great, almost unequalled, ability, and all the manly virtues that can adorn a commander." While he did not display the dashing qualities of Sheridan, he was remarkable for his correct judgment, coolness in danger, quick perception, knowledge of ground, and untiring energy. His statue in bronze has been erected in one of the public parks in Washington, D. C., by his comrades of the Army of the Tennessee.