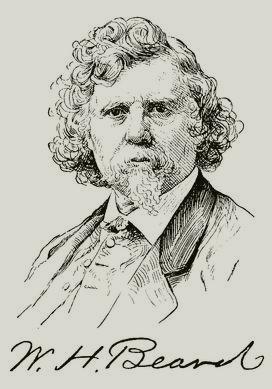 BEARD, James Henry, painter, born in Buffalo, New York, in 1814. On his father's side he is descended from Sir James Beard. of England, and on his mother's side from Sir Lochlain Maclean, of Scotland. His family removed when he was a child to Ohio, and he eventually settled in Cincinnati, where he devoted himself for many years to portrait painting, Henry Clay, John Quincy Adams, and other distinguished persons being among his sitters. He went to New York in 1846 and exhibited his " Carolina Emigrants" at the national academy, of which he became an honorary member m 1848. In 1870 he settled permanently in New York, and in 1872 was elected a full member of the academy. Of late years he has devoted himself chiefly to animal painting, in which branch of art he has achieved success. Among his best-known works are "Peep at Growing Danger" (1871); "The Widow" (1872); " Mutual Friend," "Parson's Pets" (1875) ; "Attorney and Clients," "Out all Night," "There's many a Slip" (1876) ; "Consultation," "Blood will Tell" (1877); "Don Quixote and Sancho Panza" (1878); "Don't you know Me?" (1879); "Heirs at Law" (1880); "Which has Preemption?" (1881); "You can't have this Pup" (1882); "My Easter's all Spoilt," "I don't believe one Word of It" (1883); "Detected Poacher" (1884) ; "Don't you come Here," "The Mississippi Flood" (1885); " Barn Yard," and "'ll yer gimme some? Say!" (1886).*His brother, William Holbrook, painter, born in Painesville, Ohio, 13 April 1825, began his professional career about 1846 as a portrait painter, and after traveling five years settled in Buffalo, New York In 1856 he visited Europe, studied one summer in Dusseldorf, and painted in Italy, Switzerland, and France. On his return home he worked for a time in Buffalo, and there married Miss Johnson, who died within a year. He settled in 1860 in New York City, and was elected a member of the Academy in 1862. Several years afterward he married the daughter of Thomas Le Clear, the por-trait-painter. He has painted some genre and allegorical pictures, but of late years has devoted himself almost exclusively to the painting of animals, whose habits he humanizes m a pleasing, satirical manner with much success. He has made many studies for decorative architecture, evincing great originality of conception. Among his best and most characteristic works are: "Kittens and Guinea Pig," "Power of Death" (1859) ; "Susanna and the Elders," "Swan and Owls" (1860); "Bears on a Bender" (1862); "Bear-Dance" (1.865) ; "March of Silenus" (1866) ; "Flaw in the Title," "Fallen Landmark" (1867) ; "The Good Shepherd and the Delectable Mountains," biblical (1869) ; "Diana and her Nymphs "-deer;" Darwin expounding his Theories"*monkeys ; "Morning and Evening "*cranes ; "Raining Cats and Dogs"; " Dickens and his Characters "*portrait (1871) ; " Lost Balloon," "Deer in Wood," "Runaway Match" (1876) ; "Divorce Court" (1877); "Bulls and Bears in Wall Street" (1879) ; "Voices of the Night" (1880); "Spreading the Alarm" (1881): "In the Glen" (1882) ; "Cattle upon a Thousand Hills" (1883); "Eavesdroppers," " Wine Tasters," "Who's Afraid?" (1884) ; "His Majesty receives," and "Office-Seekers" (1886). He published "Humor in Animals," a collection of his sketches (New York, 1885).*James Henry has four sons, all of them artists : James Carter, a lawyer by profession, has made spirited drawings of birds and animals, which are to be found in the best illustrated books and periodicals of the day.-Harry, the second son, entered the national army as a boy in 1861, and was a captain in the 30th Missouri volunteers at twenty-one years of age. He paints genre subjects in oils and water-colors, and makes the designs for many of Prang's publications.*Frank, the third son, was a special artist for Harper & Brothers during the civil war. He devotes himself particularly to character-sketches, in the production of which he has attained remarkable facility. He lectures on various topics, accompanying himself with crayon sketches on the blackboard. He was for a time professor of the fine arts in Syracuse University. He has published "The Blackboard and the Sunday School" (New York, 1880).*Daniel, the fourth son, was educated for a civil engineer, but, like the rest of the family, became an artist. He has an extraordinary talent for allegory as applied to decoration, and introduces animals and natural objects in singularly quaint and suggestive combinations. He has published "The American Boys' Handy Book" (New York, 1882).