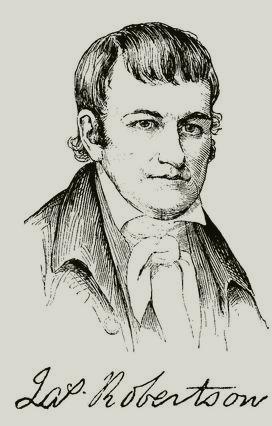 ROBERTSON, James, royal governor of New York, born in Fifeshire, Scotland, about 1710; died in England, 4 March, 1788. He was in his youth a private and then a sergeant in the British army, and in 1740, at Cartagena, New Granada, gained an ensigncy. He came to the American colonies in 1756 as major of the royal American troops that were raised at that time, was deputy quartermaster under General Abercrombie in 1758, becoming lieutenant-colonel on 8 July, accompanied Lord Amherst to Lake Champlain in 1759, and took part in the expedition to Martinique in 1762. He was for many years barrack-master in New York, in which post he acquired a fortune by various methods of peculation and extortion. He paid for government supplies in clipped half-ices and moidores, which came to be known as "Robertsons," until the Chamber of commerce resolved that such coins should be accepted only at their intrinsic value. He was promoted colonel in 1772, ordered to Loston in July, 1775, and at its evacuation connived at acts of rapine and shared in the plunder. He took command of the 60th regiment on 11 January, 1776, commanded a brigade at the battle of Long Island, and in February, 1777, returned to England on leave of absence, and intrigued against Gov William Tryon and Sir William Howe. He was commissioned as major-general on 29 August, 1777, was appointed civil governor of New York on 11 May, 1779, and arrived in New York city on 21 March, 1780. He brought a letter of instructions from Lord George Germaine, secretary of the colonies, ordering that the deserted property of rebels should be leased, and the rents appropriated to a fund for the aid of loyalist, refugees, He was directed to restore the civil law; yet, instead of reopening the constitutional courts of justice, he established arbitrary police courts with summary jurisdiction in all classes of eases, first on Long Island, then on Staten Island, and in December, 1780, in New York city, where, however, the new court could not decide civil eases involving more than Ł10. He ordered the neighboring farmers to deliver up half of their hay, and afterward seized a part of the remainder, had the wood cut on large estates near New York city, sequestrated the revenue of the markets and ferries, and committed many extortions in connivance with the military authorities, profiting greatly in his purse by all these acts, yet alienating many who might have been won over to the royal cause. When Major John Andre was captured, Governor Robertson conferred with General Nathanael Greene, but, instead of accepting the release of the British spy in exchange for Benedict Arnold, sealed his fate by showing a letter from Arnold threatening retaliation on the Americans. On the death of Gen William Phillips, he obtained the command in Virginia, and set out for the field, but returned when he heard of the arrival of Lord Cornwallis. He was made a lieutenant-general, 20 November, 1782, and returned to England on 15 April, 1783.

Start your search on James Robertson.