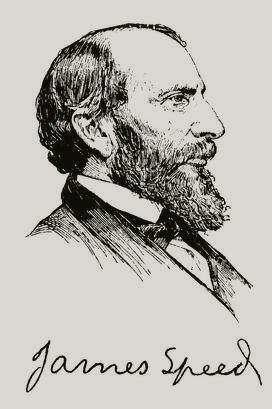 SPEED, James, lawyer, born in Jefferson county, Kentucky, 11 March, 1812; died there, 25 June, 1887. He was graduated at St. Joseph's college, Bardstown, Kentucky, in 1828, studied law at Transylvania, and began practice at Louisville. His ancestors were identified with that state from pioneer days, and were active participants in the best political life of the young common-wealth. Inheriting a repugnance to every form of oppression and injustice, he was naturally opposed to slavery, and his well-known opinions on that subject prevented his taking," any prominent part in politics until the opening of the civil war. He was then nearly fifty years old, but he had established his reputation as a jurist, and was recognized even by those wholly opposed to him on the issues of the time as able, consistent, and upright. He also held at this time a chair in the law department of the University of Louisville. A powerful element in Kentucky strove to commit the state to the disunion cause, and against that element he exercised all his talents and influence. To him as much as to any one man is ascribed the refusal of Kentucky to join the Confederacy. He became in early manhood a friend of Abraham Lincoln, and their subsequent relations continued to be intimate. When the war came, he promptly yielded to the president's urgent, request that he should assist in organizing the National troops in his native state, and he devoted himself to the cause of loyalty until 1864, when he was made attorney-general of the United States. He was a member of the legislature in 1847, and in 1849 was Emancipation candidate for the State constitutional convention, but was defeated by James Guthrie, Pro-slavery. He was a Unionist" state senator in 1861-'3, mustering officer of United States volunteers in 1861 for the first call for 75,000 men, and United States attorney-general from 1864 till 1866, when he resigned from opposition to Andrew Johnson's administration. He was also a delegate to the Republican conventions of 1872 and 1876. His last appearance in public was in delivering an address on Lincoln before the Loyal league of Cincinnati, 4 May, 1887. In 1875 he returned to his law professorship.--His brother, Joshua Fry, merchant, born in , Jefferson county, Kentucky, 14 November, 1814 ; died in Louisville, Kentucky, 29 May, 1882, was educated at the local schools and at St. Joseph's college, Bardstown. After leaving college he spent some time as a clerk in a wholesale mercantile house in Louisville. He next went to Springfield, Ilk, where he kept a country store for seven years, and formed a close and lasting friendship with Abraham Lincoln, then a young man. He took a warm interest in public affairs, and for a time assisted in editing a newspaper, and had intimate association with men of widely different politics and opinions. He returned to Kentucky in 1842 and engaged in farming in Jefferson county. In 1848 he was elected to the legislature, but was never again willing, though often solicited, to hold office. In 1851 he removed to Louisville, gaining a handsome fortune in the real-estate business. In 1861 he embraced with ardor the National cause, and was intrusted with many delicate and important missions by President Lincoln, whom he frequently visited in Washington.--His nephew, John Gilmer, born in 1852, was educated as a civil engineer, and held the office of assistant city engineer of Louisville. In 1876 he became connected with the transportation bureau of the United States at the World's fair held in Philadelphia, and later he went to New York city, where he joined the staff of the "World." and was successively its managing editor and publisher. Mr. Speed was commissioner-general of the Louisville American exhibition, and in 1885 became its secretary. He has contributed to periodicals.

Start your search on James Speed.