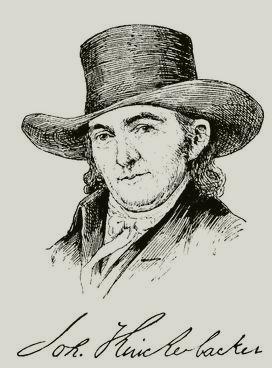 KNICKERBOCKER, Johannes, soldier, born in Schaghticoke, New York, in 1749; died there about 1827. He was descended from Herman Jansen Knickerbocker, of Friesland, Holland, one of the earliest settlers of the state of New York, and inherited the Knickerbocker estate at Schaghticoke from his uncle Herman. This was a grant from the city of Albany, to whom it had been conveyed by the Duke of York, and was subsequently divided between his sons. The homestead (see next page) is still standing on the site of the old fort built by the Duke of York as a defence against the French and Canadian Indians, being the extreme northern outpost of the colony at that time. The tree of peace, planted by Governor Dongan in the presence of the friendly Indians, is in the immediate vicinity of the mansion. Colonel Knickerbocker served in the army of the Revolution, and was at the surrender of Burgoyne at Saratoga. He subsequently represented the county of Rensselaer in the legislature.--His son, Herman, lawyer, born in Albany, New York, 27 July, 1782; died in Williamsburg, New York, 30 January, 1855, received a classical education, studied law, and began practice in Albany. Inheriting a large property, he removed to Schaghticoke, New York, where he dispensed such generous hospitality that he became known as the "Prince of Schaghticoke." He was elected to the 11th congress as a Federalist, and served from 22 May, 1809, till 3 March, 1811. In 1816 he was chosen to the state assembly, and also filled the office of county judge. He is alluded to by Washington Irving, in "Knickerbocker's History of New York," as "My cousin, the congressman"" and when Mr. Irving visited Washington he introduced him to President Madison as "My cousin, Diedrich Knickerbocker, the great historian of New York." He became involved pecuniarily in the latter years of his life. Very many anecdotes are related of "Prince Knickerbocker," who was particularly fond of practical jokes, some of which were extremely ludicrous in their consequences. One of the conditions of proprietorship by which the Knickerbocker estate was held was that the mayor and council of Albany should be entertained at least once in each year at the family mansion. "Prince Knickerbocker," having erected a spacious residence for himself some distance from the homestead, decided to become the entertainer of the mayor and council of Troy, as an offset to the festivities of the paternal home. On the arrival of these dignitaries, with appetites sharpened by a long drive, they found apparently no preparations to receive them, but, on the contrary, were allowed to overhear a dispute between the "prince" and his butler as to how they should make two chickens suffice for so many mouths. A sudden relief came to the guests when the dining-room doors were opened on a sumptuous repast.--Herman's son, David Buel, P. E. bishop, born in Schaghticoke, New York, 24 February, 1833, spells the family name with an "a" in the third syllable. He was graduated at Trinity in 1853 and at the General theological seminary in 1856. In the latter year he was made deacon, and he was ordained priest, 12 July, 1857. He spent his entire clerical life, previous to his elevation to the episcopate, in Minneapolis, Minnesota, first as a missionary and afterward as rector of Gethsemane parish. Having been elected the third bishop of Indiana, he was consecrated at St. Mark's, Philadelphia, 14 October, 1883. In 1873 Bishop Knieckerbacker received the degree of S. T. D. from Trinity. During his long residence in Minnesota he founded six parishes besides St. Barnabas hospital (1871) and the Sheltering arms orphanage (1882) of Minneapolis. In 1877 he was chosen missionary bishop of New Mexico, but declined. In the autumn of 1864-'6 he visited the Chippewa Indian country as one of a board of visitors that had been appointed for that purpose by the secretary of the interior. He has published several occasional sermons and addresses, and is editor of the "Church Worker" in Indianapolis.

Start your search on Johannes Knickerbocker.