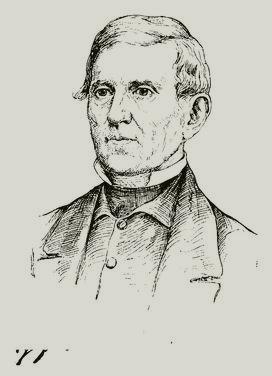 CRITTENDEN, John Jordan, statesman, born in Woodford County, Kentucky, 10 September 1787; died near Frankfort, Kentucky, 26 July 1863. His father served in the war of the Revolution, with the rank of major. The son was graduated at William and Mary College in 1807, and entered upon the practice of the law in his native courtty, but after a short time re-moved to Logan County, bordering on Tennessee, a thinly settled part of the state. In 1809 Governor Vinian Edwards appointed him attorney general of the territory of Illinois. He served for a short time as a volunteer in the war of 1812, was aide to General Shelby in 1813, and served with Adair and Berry in the Canada campaign. After leaving the army he resumed the practice of his profession, soon attaining a high place at the bar. In 1816 he was elected to the legislature, where he at once took a high rank. The next year he was elected to the U. S. Senate, but after three years' service he resigned his seat, and in 1819 took up his residence in Frankfort. Here he soon rose to eminence in the legal profession, especially as a criminal lawyer, and served several terms in the legislature. In 1827 he was appoint-ed by President Adams U. S. district attorney, but, on the accession of General Jackson to the presidency in 1829, he was removed. He was elected again to the U. S. Senate in 1835, and served a full term. In the remarkable canvass of 1840 Mr. Crittenden took an active part in favor of General Harrison. He was re-elected to the senate at the expiration of his term, but resigned his seat to accept the appointment of attorney general in Harrison's cabinet. On the death of Harrison, and the accession of Mr. Tyler, Mr. Crittenden's views of national policy not being in harmony with those of the new president, he retired from the cabinet. Mr. Clay having decided to retire from the senate in 1842, Mr. Crittenden was appointed to fill the vacant seat; and at the expiration of the term was again elected for a full term. In 1848 he was elected governor of Kentucky, and resigned his seat in the senate to fill that office.

Notwithstanding the intimate relations between Mr. Clay and himself, he favored the nomination of General Taylor in 1848 as the Whig candidate for the presidency, but only after Mr. Clay had assured him that he would not be a candidate. When the president died, and Mr. Fillmore succeeded him, Mr. Crittenden accepted the portfolio of attorney general in the new cabinet. The great question as to the constitutionality of the fugitive-slave law was referred to him, and he prepared an opinion in favor of it.

In 1855 he was once more elected to the senate, and took a leading part in the discussions of the important questions that came before congress in the course of the next five years. The sentiments uttered by him were eminently national, and he exerted his full strength in a patriotic effort to effect a satisfactory settlement of the disturbing elements that imperiled the perpetuity of the Union. He opposed the repeal of the Missouri compromise, and, in expressing his views of the questions growing out of the Kansas troubles, rigorously opposed the policy of the administrations of Presidents Pierce and Buchanan. He favored the election of Bell and Everett in the presidential canvass of 1860. He vehemently opposed secession, and supported Mr. Lincoln's administration, holding that it was the right and duty of the government to maintain the Union by force.

He exerted his full power to effect a compromise between the contending parties, but, failing to accomplish it, took his stand for the government, in the hope of maintaining the Union, he proposed an amendment to the constitution in December 1860, providing for the re-enactment of the Missouri compromise, and the prohibition of any interference by congress with slavery wherever it should be legally established. Mr. Crittenden had been six times elected to the senate, and his last effort in that body was to save the Union. On 4 March 1861, he presented the credentials of his successor, Mr. Breckinridge, and retired. Returning to Kentucky, he urged his state to stand by the Union, and held it firmly against the appeals of the other states of the south. He became a candidate for a seat in congress, and, being elected, took his place in the House of Representatives, where he was at once recognized as a powerful leader. He offered, on 19 July 1861, the following resolution, which was adopted with only two dissenting votes : "Resolved by the House of Representatives of the congress of the United States, That the present deplorable civil war has been forced upon the country by the disunionists of the southern states, now in arms against the constitutional government, and in arms around the capital; that in this national emergency congress, banishing all feelings of mere passion or resentment, will recollect its only duty to the whole country; that this war is not waged on their part in any spirit of oppression, or for any purpose of conquest or subjugation, or purpose of overthrowing" or interfering with the rights or established institutions of those states, but to defend and maintain the supremacy of the constitution. and to preserve the Union with all the dignity, equality, and rights of the several states unimpaired; and that as soon as these objects are accomplished the war ought to cease."

He opposed the employment of slaves as soldiers, and he denied the power of congress to organize the state of West Virginia. His last speech, delivered 22 February 1863, showed that his force had not abated. He denounced the conscription bill, and declared that the war had been changed from its original purpose. He was again a candidate for congress, but died before the election. Mr. Crittenden's personal qualities were fine. He made friends everywhere; there was cordiality blended with dignity in his manner; his voice was musical in conversation, and captivating in his public speeches. Thomas Corwin and others of his compeers esteemed him the most able debater in the senate.

--His son, George Bibb Crittenden, born in Russellville, Kentucky, 20 March 1812 ; died in Danville, Kentucky, 27 November 1880, was graduated at the U. S. military academy in 1832, served in the Black Hawk expedition, though not at the seat of war, and resigned, 30 April 1833. He volunteered in the Texan revolution of 1835, and was taken prisoner at Meir, on the Rio Grande, by the Mexicans, who carried him with his company to the City of Mexico, where he was confined in a foul prison until released, through the intervention of Daniel Webster, nearly a year afterward. On one occasion the Mexicans decided to shoot a certain number of the prisoners, as a measure of retaliation, and Crittenden, being an officer, was one of the first to draw lots to determine which of them should die. He drew a favorable lot, but when a friend who had a family drew a fatal black bean, he gave to that soldier his white bean, and risked his life in another chance.

He served through the Mexican war as captain of mounted rifles, and was brevetted major for gallantry at Contreras and Churubusco, was one of the first to enter the City of Mexico, became major of mounted rifles, 15 April 1848, served on frontier duty, was promoted lieutenant colonel, 30 December 1856, and on 10 June 1861, resigned and joined the Confederate service. He was commissioned brigadier-general, and soon afterward major general, and was assigned, in November 1861, to the command of southeastern Kentucky and a part of eastern Tennessee. On learning that General Zollicoffer had moved his forces across the Cumberland at Mill Spring, he gave orders to re-cross the River, but Zollicoffer delayed executing the order until the rise of the River rendered it impracticable to transport the artillery. When General Thomas approached with a large force, on 18 January 1862, General Crittenden ordered an attack. The Confederates attempted to surprise the Union troops at Fishing Creek; but only two regiments came up to beginning the attack in the morning of 19 January and after the death of General Zollicoffer the troops were demoralized. General Crittenden affected the retreat of his forces across the River, leaving the artillery behind. He was severely censured for making the attack, was kept under arrest until November and soon afterward resigned his commission. He continued to serve as a volunteer on the staff of General John S. Williams, who frequently followed his advice and gave him the command of bodies of troops. After the war he resided in Frankfort, Kentucky, where he was state librarian from 1867 to 1871.

--Another son, Thomas Leonidas Crittenden, born in Russellville, Kentucky, 15 May 1815, studied law under his father, was admitted to the bar, and became commonwealth's attorney in Kentucky in 1842. He served in the Mexican war as lieutenant colonel of Kentucky infantry, and was volunteer aide to General Taylor at the battle of Buena Vista. In 1849 he was appointed by President Taylor consul to Liverpool, and served till 1853, then returned to the United States, resided for some time at Frankfort, and afterward engaged in mercantile business at Louisville, Kentucky. At the beginning of the civil war he espoused the national cause, and on 27 October 1861, was appointed brigadier-general of volunteers. He commanded a division at the battle of Shiloh, and was promoted major general, 17 July 1862, for gallant services on that occasion, and assigned to the command of a division in the Army of the Tennessee. He commanded the 2d corps, forming the left wing of the Army of the Ohio under General Buell, and afterward served under General Rosecrans in the battle of Stone River, and at Chickamauga commanded one of the two corps that were routed. In the Virginia campaign of 1864 he commanded a division of the 9th corps. He resigned, 13 December 1864, but entered the regular army as colonel of the 32d infantry on 28 July 1866, was brevetted brigadier-general for gallantry at Stone River, 2 March 1867, transferred to the 17th infantry in 1869, and served with his regiment on the frontier until he was retired on 19 May 1881.

--Thomas T., a nephew of John Jordan, born in Alabama about 1828, served in the Mexican war as lieutenant of Missouri mounted volunteers, afterward settled in Indiana, and entered the volunteer army in 1861 us colonel of a regiment of three months' men, with a detachment of which he took part in the battle of Philippi. The regiment was reorganized under his command at the expiration of its term of service, and served for three years. He was promoted brigadier-general on 28 April 1862, and taken prisoner at Murfreesboro on 12 July and not released till October. He resigned 5 May 1863.