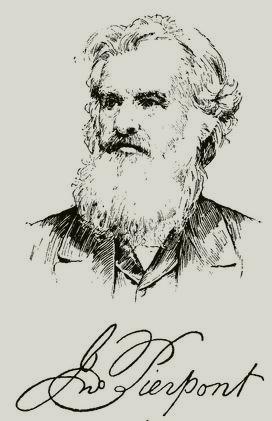 PIERPONT, John, poet, born in Litchfield, Connecticut, 6 April, 1785; died in Medford, Massachusetts, 26 August, 1866. He was a great-grandson of James, who is noticed below. He was graduated at Yale in 1804, and after assisting for a short time in the academy at Bethlehem, Connecticut, in the autumn of 1805 went to South Carolina, and passed nearly four years as a private tutor in the family of Colonel William Allston. After his return in 1809 he studied law at Litchfield, was admitted to the bar in 1812, and practised for a time in Newburyport, Massachusetts The profession proving injurious to his health, he relinquished it, and engaged in business as a merchant, first in Boston, and afterward in Baltimore. In 1816 he abandoned commerce for theology, which he studied, first at Baltimore, and afterward at Cambridge divinity school. In April, 1819, he was ordained pastor of the Hollis street church, Boston. In 1835 he made a tour through Europe and Asia Minor, and on his return he resumed his pastoral charge in Boston, where he continued till 10 May, 1845. The freedom with which he expressed his opinions, especially in regard to the temperance cause, had given rise to some feeling before his departure for Europe; and in 1838 there sprung up between himself and a part of his parish a controversy which lasted seven years, when, after triumphantly sustaining himself against the charges of his adversaries, he requested a dismissal. He then became for four years pastor of a Unitarian church in Troy, New York, on 1 August, 1849, was settled over the Congregational church in Medford, and resigned, 6 April, 1856. He was a zealous reformer, powerfully advocated the temper-ante and anti-slavery movements, was the candidate of the Liberty party for governor, and in 1850 of the Free-soil party for congress. After the civil war began, though seventy-six years of age, he went into the field as chaplain of a Massachusetts regiment, but, finding his strength unequal to the discharge of his duties, he soon afterward resigned, and was appointed to a clerkship in the treasury department at Washington, which he held till his death. Mr. Pierpont was a thorough scholar, a graceful and facile speaker, and ranked deservedly high as a poet. He published "Airs of Palestine " (Baltimore, 1816); re-issued, with additions, under the title "Airs of Palestine, and other Poems" (Boston, 1840). One of his best-known poems is " Warren's Address at the Battle of Bunker Hill." His long poem that he read at the Litchfield county centennial in 1851 contains a description of the " Yankee boy" and his ingenuity, which has often been quoted. He also published several sermons and addresses. See Wilson's "Bryant and his Friends" (New York, 1886).--His cousin, John, jurist, born in Litchfield, Connecticut, 10 September, 1805; died in Vergennes, Vermont, 6 January, 1882, received a common-school education, studied law in Litchfield law-school, and was graduated in 1827. He began practice at Pittsford, Vermont, and in 1832 removed to Vergennes. He was representative of his town in the legislature in 1841, and state senator in 1855-'7. In 1857 he was elected associate judge of the supreme court of the state. In 1865 he became chief justice of Vermont, which office he held by continuous elections till his death.

Start your search on John Pierpont.