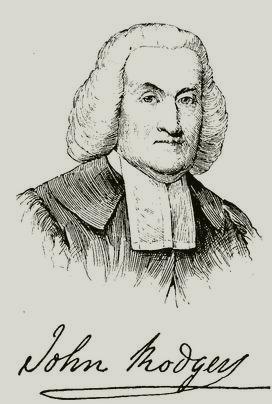 RODGERS, John, clergyman, born in Boston, Massachusetts, 5 August, 1727; died in New York city, 7 May, 1811. His parents removed in 1728 to Philadelphia, Pennsylvania He was fitted for the ministry by Reverend Samuel Blair at New Londonderry, Pennsylvania, and on 16 March, 1749, was installed as pastor of the Presbyterian church at St. George's, Delaware In September, 1765, on the death of David Bostwick, he assumed the pastoral charge of the latter's congregation in New York city, which rapidly grew m numbers, and in 1767 erected a second building, on the cornet of Beckman and Nassau streets. In 1768 he received the degree of D. D. from Edinburgh university. He was an antagonist of the Episcopalians, through whose influence an act of incorporation was refused to his society, and throughout the Revolution he was an ardent and active patriot. Near the close of February, 1776, he removed his family from New York, and did not return till its evacuation by the British at the end of the war. During the summer of 1776 he acted as chaplain to Gen William Heath's brigade. The following winter he spent in the south, and was reported as engaged in an attempt to win over the Regulators of North Carolina to the American cause He was chaplain of the New York provincial congress, and afterward of the council of safety, and of the first legislature in 1777. During the war he preached at Amenia, New York, Danbury, Connecticut, and Lamington, New Jersey The British used the church in Wall street for barracks, and the brick church on Beckman street for a hospital, and left both in ruins. While they were rebuilding, the vestry of Trinity church permitted the Presbyterians to worship in St. Paul's church and St. George's chapel. The united Presbyterian congregations decided to employ but one minister, and he remained the sole pastor till a coadjutor was engaged in 1789. Dr. Rodgers was moderator of the first general assembly held in 1789. He was vice-chancellor of the New York state university from its creation in 1787, and was chosen president of the Missionary society, which was established in 1796. A contemporary says: "Dr. Rodgers is certainly the most accomplished gentleman for a clergyman, not to except even Dr. Cooper, that I have ever been acquainted with. He lives in elegant style, and entertains company as genteelly as any gentleman in the city."

Start your search on John Rodgers.