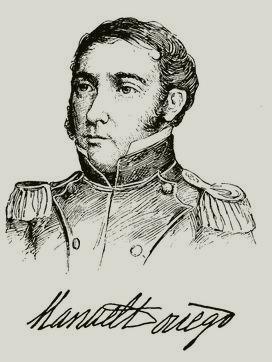 DORREGO, Manuel, Argentine soldier, born in Buenos Ayres, 15 February 1787; died at Navarro, 13 December 1828. He was graduated in law at the University of San Carlos, in his native City, in 1809, and went to Santiago de Chili to finish his studies.While he was there the news of the revolution against Spanish rule in Buenos Ayres, 25 May 1810, arrived, followed in June by that of the deposal of the Spanish governor of Chili, Carrasco, and the formation of a revolutionary junta, 18 September Dorrego joined in the revolutionary movement, and the Chilean government, after its independence was recognized, struck a metal in his honor, with the inscription, "Chili to its first defender."

In 1811 Dorrego returned to his native City, was appointed commander of a regiment of cavalry, and distinguished himself in the battle of Salta under General Saavedra. In 1812, commanding a brigade in the army of General Pueyrredon, he marched to Upper Peru, and defeated the Spanish forces in Nazareno and Suipacha, being severely wounded in the latter battle. In September of the same year he took a distinguished part in the battle of Tucuman, and in February 1813, in that of Salta, and when Artigas took possession of Uruguay in 1814, Dorrego defeated him in the bloody battle of Guayabo, and in the following year participated in the battles of Barrios and Sourena, in which he captured many prisoners, and those of Pozo Verde and Llatarte, saving those towns from conflagration and pillage. When Pueyrredon, 26 March 1816, declared himself dictator, Dorrego energetically opposed him in the press, and, on a charge of military insubordination and arrogance, was banished. He went to the United States, resided there nearly four years, and published "Cartas apoloj6ticas en contestacidn al auto de expatriacidn " (Baltimore, 1817). On the downfall of the dictator in 1820, Dorrego went home, was elected governor of Buenos Ayres, and organized troops to subdue the lawless bands that opposed the authorities in the interior under the name of " montoneros," whom he defeated, 2 August at San Nicolas de los Arroyos. In 1823 he was elected, by a popular vote, a member of the Junta de Representantes, and in 1826 of the constituent congress, where he distinguished himself by his eloquence, defending federal principles against the central party or "Unitarios." In July 1827, he was again elected governor of Buenos Ayres, on the resignation of General Rivadavia as unitario president, and as such recognized the independence of Uruguay, notwithstanding the opposition of the other Argentine provinces, but with the general approbation of other American republics and European governments. On 1 December 1828, General Lavalle pronounced against Dorrego's government, and the latter, with such forces as he could collect, marched against the insurgents, but was defeated at Navarro on the 13th, taken prisoner, and shot the same day, by Lavalle's order, without a trial. When in 1862 the federal principle triumphed, the government erected a monmnent to him in Buenos Ayres.

Start your search on Manuel Dorrego.