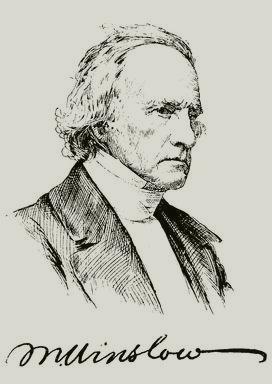 WINSLOW, Miron, missionary, born in Williston, Vermont, 11 December, 1789; died at Cape of Good Hope, 22 October, 1864. He was descended from a brother of Governor Edward Winslow. After graduation at Middlebury in 1815, and at Andover theological seminary in 1818, he sailed in 1819 for Ceylon, where he established a mission and afterward a seminary at Oodooville. In 1836 he founded the mission at Madras, where he spent the remainder of his life establishing seven vernacular schools and a native college Harvard conferred the degree of D.D. on him in 1858. His chief books are " Sketch of the Missions" (Andover, 1819); "Memoir of Harriet, Lathrop Winslow," his wife (New York, 1835" republished in London, France, and Turkey)" " Hints on Missions to India" (New York, 1856)" a translation of the Bible into Tamil" and a "Comprehensive Tamil and English Dictionary," in part from manuscript materials of the late Reverend Joseph Knight (Madras, 1862). This great work, costing $20,000 and more than twenty years of toil, averaging three hours a day, contains 68,000 words and definitions, of which about half owe their lexicographic birth and position to the author.--His first wife, Harriet Lathrop, born in Norwich, Connecticut, 9 April, 1796; died in Oodooville, Ceylon, 14 January, 1833, married, 11 January, 1819, and sailed for Ceylon, 8 June, 1819, where she was distinguished for her educational labors in connection with her husband's work.--Their son, Charles Lathrop, born in Oodooville, Ceylon, 12 January, 1821; died in New York, 24 May, 1832. His memoir, first published by the American tract society (1834), was republished in Europe. It contains the well-known lines of Mrs. Sigourney on his death.--Catherine Waterbury Carman, Miron's second wife, born in 1799; died near Madras, 23 September, 1837, married Mr. Winslow, 23 April, 1835. She was one of the most accomplished women and extensive travellers in Europe in her day. The " Remains of Mrs. Winslow," edited by Reverend Jared B. Waterbury, were published (Boston, 1851).--His brother, Hubbard, author, born in Williston, Vermont, 30 October, 1799; died there, 13 August, 1864, was graduated at Yale in 1825, studied two years at Andover, and completed his theological course at Yale. He was settled over churches at Dover, New Hampshire, Boston, Massachusetts, and Geneva, New York At Boston he was Lyman Beecher's successor in the Bowdoin street church. From 1844 till 1853 he conducted the Mount Vernon institute in Boston, devoting himself during this period and for much of his life to the advancement of higher education in Boston and among the colleges. His published volumes are "History of the First Church, Dover, New Hampshire" (Dover, 1831); " Doctrine of the Trinity" (1831) ; " Controversial Theology" (Boston, 1832) : "Philosophical Papers" (1833) ; "Christianity applied to our Civil and Social Relations" (1835); " Young Man's Aid to Knowledge" (1836) ; "Aids to Self-Examination" (1837); " Mental Cultivation" (1839); " Lectures to Sunday-School Teachers" (1839) ; "The Appropriate Sphere of Woman" (1840) ; "Natural Science and Revelation " (1841); " Design and Mode of Baptism" (1842);" Christian Doctrines" (1844) ; "Intellectual Philosophy" (1852); "Moral Philosophy" (New York, 1856); and " Hidden Life" (1863). The "Young Man's Aid," published in England also, had a sale of 100,000 copies, and more than 250,000 copies of his tract, "Are You a Christian?" were issued. Among Dr. Winslow's minor publications are his eulogy on Daniel Webster (1853) and " History of the Presbyterian Church, Geneva, New York" (1858). With Jacob Abbott and Ethan A. Andrews he edited the "Religious Magazine" (Boston, 1837-'8). --Another brother, Gordon, clergyman, born in Williston, Vermont, 12 September, 1803; died in Potomac river, 7 June, 1864, entered the ministry of the Protestant Episcopal church, and was settled successively at Troy and Elmira, New York, Annapolis, Maryland, and Staten island. He enlisted as chaplain of the 5th New York regiment, of which his son Cleveland afterward became colonel, and was instrumental with Dr. Henry W. Bellows and others in establishing the sanitary commission, holding the post of its inspector for the Army of the Potomac. He was a member of scientific bodies and contributor to their published proceedings, and active in philanthropic work. New York university gave him in 1863 the honorary degree of M. D., both because of his distinguished service in the sanitary commission and his capabilities in caring for the sick and wounded.--His son, Cleveland, soldier, born in Medford, Massachusetts, in 1836; died in Alexandria, Virginia, 7 July, 1864, was an officer in the 71st New York regiment when the civil war opened. He raised a company, and was with the 5th New York in all its engagements, beginning with Big Bethel, till he received his mortal wound, which terminated his life before his nomination as brigadier-general for gallant conduct and efficient service could be acted upon. He died from a wound that he received at Mechanicsville, while leading his regiment, as its colonel, into battle.--His brother, GORDON, born in 1839, a captain in the same regiment, is now a captain in the regular army. Their mother, Catherine Fish Winslow, was a cousin of Hamilton Fish.--Hubbard's son, William Copley, archaeologist, born in Boston, Massachusetts, 13 January, 1840, was graduated at Hamilton college in 1862, and at the Protestant Episcopal general theological seminary, New York city, in 1865. He has since been engaged in preaching, lecturing, and writing for the press, and was assistant editor of the New York "World" in 1862-'3, and of the "Christian Union" in 1864. Since 1870 he has resided in Boston, and has had temporary charge of churches there and in Taunton and Weymouth. He is vice-president and honorary treasurer of the Egypt exploration fund for America, and by his efforts has created a widespread interest in its work. He has written numerous articles for the reviews and journals on exploration and cognate subjects, and is regarded as an authority on biblical, and particularly Egyptological, explorations. Through his efforts the Boston museum of fine arts has received a colossal statue of Ramses II., the Pharaoh of the oppression, discovered in the suburbs of the site of the biblical Zoan. He is actively connected with various learned societies, and received the degree of Ph.D. from Hamilton college in 1866, that of LL. D. from St. Andrew's, Scotland, in 1886, L. L. D. from Columbia in 1887, and D.D. from Amherst in 1887.

Start your search on Miron Winslow.