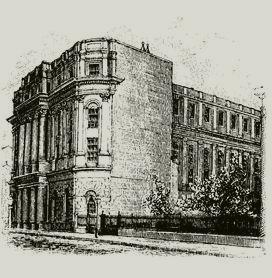 TULANE, Paul, philanthropist, born in Cherry Valley, near Princeton, New Jersey, in May, 1801: died in Princeton, 27 March, 1887. He was the son of a French emigrant, a native of Tours, who was engaged in the lumber trade between Philadelphia and the French West Indies. The office of probate judge of Tours was held by members of his family for 150 years. Paul Tulane had no taste for books, but a marked talent for trade from early youth. In 1818 he made a tour of the southwest with a wealthy cousin and namesake, and in 1822 emigrated to New Orleans. It was a yellow-fever summer, and he went while the epidemic was at its height, because there were better openings then for young men. His first ventures were marked with success, and he soon engaged in a general supply business which proved lucrative. In the latter part of his business career this was narrowed down to a trade in clothing. Until 1856 he continued in active business in New Orleans with unvarying success. In 1840 he visited France to see his father, who pointed out to him the decadence of Tours and Bordeaux due to the emancipation of the West India slaves, and warned him of a like probable fate to New Orleans. In consequence, from this time Mr. Tulane began to transfer a large part of his estate to the north, but he continued his residence in New Orleans until 1873, when he permanently removed to Princeton, New Jersey During his entire career in New Orleans he was looked up to as a man of great industry, sound judgment, and perfect integrity. His mode of life was unostentatious, but he was a generous giver both to public and private charities, especially for educational objects. His affection for the city of New Orleans was strong and unwavering, and this took definite shape in an act of donation on 2 May, 1882, by which he conveyed his real estate in New Orleans to a board of seventeen administrators for the higher education of the white youth of Louisiana. This and subsequent donations aggregated about $1,100,000, and he avowed his purpose of dedicating a large part of the residue of his estate, amounting to about 81,000,000 more, to the same purpose ; but, as he died intestate, it fell to his legal heirs. The Tulane education fund has been used to found the Tulane university of Louisiana at New Orleans, which has had a rapid and prosperous development, and is now the first institution in the south in endowment and number of students. (See illustration.)

Start your search on Paul Tulane.