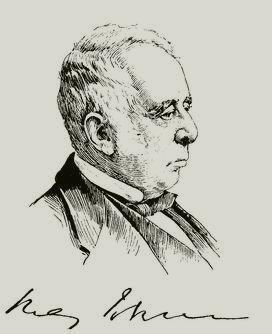 JOHNSON, Reverdy, statesman, born in Annapolis, Maryland, 21 May, 1796; died there, 10 February, 1876 He was educated at St. John's college, studied law with his father, John Johnson, chancellor of the state, and was admitted to the bar in 1815. He began to practise in Upper Marlboro, Prince George county, was appointed deputy attorney-general for that judicial district, and in 1817 removed to Baltimore, where he practised with success. In 1821 he was elected to the state senate for a term of five years, and soon distinguished himself for his intelligent, bold, and comprehensive discussion of the question of state and Federal policy that was agitating the country. He was re-elected for the succeeding term, but resigned at the end of the second year to become attorney-general in President Taylor's cabinet. In 1845 he was sent to the United States senate as a Whig, serving till 1849. One of the most striking characteristics of Mr. Johnson's public life was his occasional disregard of party dictation. A memorable instance of this independent action was his hearty support of the Mexican war measures of Polk's administration, in spite of the violent opposition of the Whigs. On the accession of President Fillmore, Mr. Johnson resigned, and for more than twenty years afterward he was exclusively engaged in his professional duties, appearing during that time in the trial of celebrated cases in almost every part of the country, from New England to California. In 1854 he was employed by some English claimants to argue a case in London before an Anglo-American commission. During his residence of several months in England he was received with marked attention by the barristers and judges of that country, and left a reputation behind him which had not been forgotten when, fourteen years afterward, he went as minister to the court of St. James. Whether in or out of office, Mr. Johnson was invariably outspoken in his opinions of all public matters, his decided opposition to the proscriptive doctrines of the "Know-Nothing" party led him, together with many of the Whig leaders in Maryland, to unite with the Democrats in 1856 and in the subsequent support of Buchanan's administration. In the presidential contest of 1860 Mr. Johnson joined the Douglas wing of the party, and was active in his efforts to secure its success, he was a member of the peace congress in Washington in 1861 and in 1862. Throughout the civil war he supported the National cause, and sustained the measures of the administration. When peace was restored he urged the readmission of the southern states without delay. He voted for the first reconstruction bill, supported theft measure when it was vetoed by President Johnson, and opposed the second bill. During his term he was engaged by the government as an umpire in adjusting questions that had arisen in New Orleans during the civil war. In 1868 he resigned his seat in the senate, having been appointed by President Johnson to succeed Charles Francis Adams as minister to England, where he negotiated the Johnson-Clarendon treaty for the settlement of the Alabama claims, which was rejected by the senate. In his negotiations with Lord Clarendon he procured a perfect recognition of everything that our government claimed in the international controversies growing out of the civil war. The failure of the senate to ratify the Johnson-Clarendon treaty was due to party jealousy, and nothing more than was embraced in the terms of Mr. Johnson's protocol was afterward obtained from Great Britain. Mr. Johnson's popularity among Englishmen was proverbial, and his recall by President Grant, in 1869, and the nomination of his Republican successor became a party necessity. Although seventy-three years of age when he returned from England, he resumed his law practice with his early eagerness. In 1872 he supported Horace Greeley for president. He was constantly employed in court and office practice until his death, which was caused by apoplexy, and which took place at the executive mansion in Annapolis, where he had been the guest of the governor, and was awaiting the call of a case in the court of appeals. In conjunction with Mr. Thomas Harris he reported the decisions of the Maryland court of appeals, known as "Harris's and Johnson's Reports" (7 vols., 1820-'7).

Start your search on Reverdy Johnson.