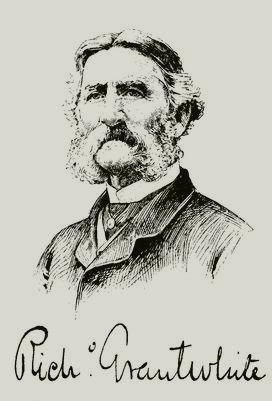 WHITE, Richard Grant, author, born in New York city, 22 May, 1821; died there, 8 April, 1885. His ancestor, John White, came from England in 1636, and was a settler of Cambridge, Massachusetts, and Hartford, Connecticut, and his grandfather, Calvin (1763-1853), was rector of St. James's parish in Derby, Connecticut, but afterward became a Roman Catholic, although he did not enter the priesthood of that church. He was a Tory and just escaped hanging by the mob because he "refused to shout ' Property and liberty!' " Richard Grant's father, Richard Mansfield White, intended his son for the church, but after his graduation at the University of the city of New York in 1839 he studied medicine and afterward law, and was admitted to the bar in 1845. His literary tendencies drew him from law, and he soon became a contributor to the New York "Courier and Enquirer," where his musical, dramatic, and art criticisms attracted attention. From 1845 till 1859 he was connected with this journal, and he served as its editor in 1854-'9. He was a founder in 1846-'7 of "Yankee Doodle," and also a founder in 1860 of the" World," from which he withdrew in 1861. During the civil war he wrote a series of letters to the London "Spectator," signed "A Yankee," which were of much service to the National cause. For nearly twenty years he was chief of the United States revenue marine bureau in the district of New York, which post he resigned in 1878. He wrote for magazines, contributed articles to eyclopaedias, and edited the "Illustrated Record of the New York Exhibition of the Industry of all Nations" (i854), and " Poetry, Lyrical, Narrative, and Satirical of the Civil War" (1866). On the publication of John Payne Collier's folio manuscript emendations of Shakespeare (1852), Mr. White contributed a series of papers to "Putnam's Magazine," in which he denied the value of the emendations. The acumen and style of these articles elicited general admiration, and their subtile and vigorous criticism gave hint a place among the most learned Shakespearian scholars. His publications are an "Appeal from the Sentence of the Bishop) [Onderdonk] of New York" (New York, 1845); "Biographical and Critical Hand-Book of Christian Art " (1853); " Shakespeare's Scholar" (1854); " The Works of William Shakespeare," an annotated edition (12 vols., Boston, 1857-'65); "Essay on the Authorship of the Three Parts of Henry the Sixth" (Cambridge, 1859); " National Hymns," an essay, with selections from the hymns written for a prize of $600 offered by a national committee, which was not awarded (New York, 1861); "Memoirs of William Shakespeare, with an Essay toward the Expression of his Genius, and Account of the Rise and Progress of the English Drama" (Boston, 1865) ; " The New Gospel of Peace according to St. Benjamin," an anonymous political satire (Cambridge, 1866)" " Words and their Uses, a Study of the English Language" (New York, 1870; revised ed., 1872); "The American View of the Copyright Question" (1880); "Every-Day English" (1881) ; " England Without and Within" (1881); "The Riverside Edition of the Works of William Shakespeare" (3 vols., Cambridge, 1883); " The Fate of Mansfield Humphrey," a novel (1884); and a series of articles on the "Failure of the Public School System in the United States." His last literary labor was the gathering of several Shakespeare articles that had appeared in periodicals, which were completed and published after his death, under the title of "Studies in Shakespeare" (Boston, l S85). The part that is devoted to glossaries and lexicons is of special interest to scholars.--His son, Stanford, architect, born in New York city, 9 November, 1853, was educated in his native city in public schools and under private tutors. He studied architecture under Charles D. Gambrill and Henry H. Richardson, and was chief assistant of that firm when they built Trinity church, Boston. During 1878-'80 he studied in Europe, and in 1881 he entered into partnership with Charles F. McKim and William R. Mead. Mr. White has made all of the designs for the architectural work of the statues by Augustus St. Gaudens, notably the pedestal of the Farragut monument in Madison square, New York city (see illustration), and that of the Lincoln statue in Chicago. He has furnished many designs for book-covers, mid those of the "Century" and "Scribner's Magazine" were by him. The University of the city of New York conferred on him the degree of A. M. in 1882. He is a member of the Tile club, the American institute of architects, and other artistic and professional organizations.