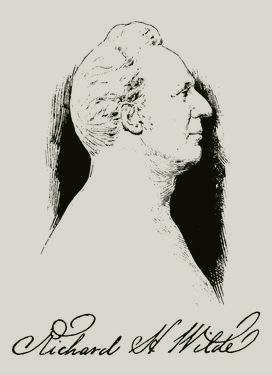 WILDE, Richard Henry, scholar, born in Dublin, Ireland, 24 September, 1789; died in New Orleans, Louisiana, 10 September, 1847. His father, Richard Wilde, a Dublin merchant, came to the United States in 1797, and died in 1802. The widow and son removed to Augusta, Georgia, where he fitted himself for the bar and was admitted in 1809. He was elected attorney-general of Georgia, and then chosen to congress as a Democrat, serving one term, in 1815-'17. He returned to the bar, but sat again in congress from 7 February till 3 March, 1825, being elected to fill a vacancy, and, after a defeat for the next congress, was a member again from 1827 till 1835. His best speeches were those on internal improvements (Washington, 1828), in opposition to the Force bill and to the removal of the deposits from the United States bank, and those on the tariff and the currency. His opposition to President Jackson made him unpopular with his constituents, and he was defeated in 1834, whereupon he went to Europe and remained there till 1840, engaged in scholarly pursuits. He devoted himself specially to Italian literature, chiefly in Florence, and, obtaining access to valuable private libraries, discovered some forgotten documents bearing on the life and times of Dante, and also a portrait of the poet that had been painted on the wall of the chapel of Bargello by Giotto, but covered for many years with whitewash. He also made a study of the life of Torquato Tas so, and became the friend of many Italian literary men. After his return to this country he was a member of the Whig state convention at Milledgeville, Georgia, in 1842, but took no further part in politics. He removed to New Orleans in 1843, and, on the law department of the University of Louisiana, became its professor of constitutional law, which post he held till his death from yellow fever. Mr. Wilde's brother, James, who had been a subaltern officer in the Seminole war, interested him in Florida, and he began to write an epic whose scene was laid in that state. This was never finished, but a lyric that it contained, called " The Lament of the Captive," but now known by its first line, "My Life is like the Summer Rose," became widely popular. It was suggested by the story of Juan Ortez, the last survivor of the ill-fated expedition of Panfilo de Narvaez. The verses appeared first in print about 1815 without Mr. Wilde's authorization, and were continually republished. Soon afterward it was said in the "North American Review" that they were translated from a Greek ode that purported to have been written by Aleaeus. Scholars soon discovered that the latter was not genuine, and it was found that it was the work of Anthony Barclay, of Savannah, who had translated Mr. Wilde's song into Greek for his own amusement. The song was set to music by Charles Thibault. Mr. Barclay subsequently wrote an "Authentic Account of Wilde's Alleged Plagiarism," which was published by the Georgia historical society (Savannah, 1871). The story of the poem in its entirety was first told in "Our Familiar Songs" by Helen Kendrick Johnson (New York, 1881). Mr. Wilde's only published work is "Conjectures and Researches concerning the Love, Madness, and Imprisonment of Torquato Tasso," the fruit of his studies in Italy, a scholarly work, which is also valuable for the poetical translations from Tasso that it contains (2 vols., New York, 1842). He contributed an essay on "Petrarch" to the "Southern Review," and wrote poetry, original and translated, for the magazines. His translations from the Italian, Spanish, and French are graceful and correct. He left many manuscripts, including an unfinished "Life of Dante " : a collection of translations of Italian lyrics, which he intended to publish with biographical sketches of the authors; and a completed poem of several cantos, entitled "Hesperia," which was edited by his son and issued after his death (Boston, 1867).