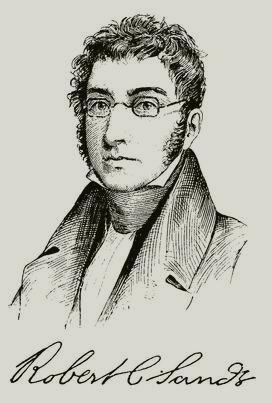 SANDS, Robert Charles, author, born in Flat-bush, Long Island, New York, 11 May, 1799; died in Hoboken, New Jersey, 17 December, 1832. His father, Comfort Sands (1748-1834), a New York merchant, was an active Revolutionary patriot, a delegate to the State constitutional convention of 1777, and for many years a member of the legislature. The son was graduated at Columbia in 1815. While in college, he and James Wallis Eastburn had planned two periodicals, "The Moralist," of which but a single number appeared, and "Academic Recreations," which lasted a year. To both of these Sands contributed prose and verse. On his graduation he began to study law with David B. Ogden, but at the same time wrote on a great variety of subjects. He was one of the authors of a series of essays in the "Daily Advertiser," entitled "The Neologist" (1817), and another entitled "The Amphilogist" (1819), which were marked by purity of taste. He also began to translate the Psalms of David with his friend Eastburn, and wrote with him "Yamoy-den." a poem founded on the history of the Indian, King Philip, which was published, with additions by Sands, after Eastburn's death (New York, 1820). He was admitted to the bar in 1820, declining the chair of belles-lettres in I)ickinson college, but continued to devote himself to literature, and in 1823-'4 issued, with others, the "St. Tammany Magazine," of which seven numbers appeared. In 1824 he began the "Atlantic Magazine," and when it became the " New York Review" he conducted it with William Cullen Bryant in 1825-'7. From the latter year till his death he was an editor of the "Commercial Advertiser." During the latter part of his life he lived in It oboken. N. J., then a rural village, the beauties of whose environs he celebrated in some of his writings. Besides the works that have been mentioned above, he wrote "The Talisman," an annual, jointly with William Cullen Bryant and Gulian C. Ver-planck (3 vols., 1828 '30 ; republished as "Miscellanies"). In this appeared "The Dream of the Princess Papantzin," one of his longest poems, He contributed to "Tales of Glauber Spa," for which he wrote the humorous introduction (2 vols., 1832), and was also the author of "Life and Correspond-enceof Paul Jones" (1831). His works were edited, with a memoir, by Gulian C. Verplanck (2 vols., New York, 1834).