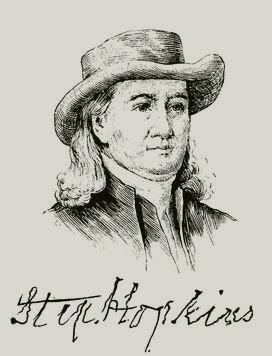 HOPKINS, Stephen, signer of the Declaration of Independence, born in Scituate, Rhode Island. 7 March, 1707; died in Providence, Rhode Island, 13 July, 1785. He was brought up as a farmer, and inherited an estate in Scituate He was a member of the general assembly in 1732-'8, and in 1736 was appointed a justice of the peace and one of the justices of the court of common pleas, of which he became chief justice in 1739. During his whole life he was largely employed as a land surveyor. In 1741 he was again chosen to represent the town of Scituate in the assembly, and was elected speaker. In 1742 he sold his farm and removed to Providence, where he made a survey of the streets and lots, and afterward began business as a merchant and ship builder. The same year he was sent to the assembly from Providence, and was again chosen speaker. In 1751 he was elected for the fourteenth time to the general assembly, and later in the year appointed chief justice of the superior court He was a delegate from Rhode Island to the convention that met at Albany in 1754 for the purposes of concerting a plan of military and political union of the colonies and arranging an alliance with the Indians, in view of the impending war with France. He was one of the committee that drafted a plan of colonial union, which was accepted by the convention, but objected to in the various colonies and in Great Britain. In 1756 Mr. Hopkins was elected governor of the colony, and held that office, with the exception of one year, when he was defeated by his political rival, Samuel Ward, until 1764. After Ward had occupied the governor's chair for two years, Hopkins was again elected in 1767; but in October of that year he resigned for the purpose of reconciling and uniting the contending factions and putting an end to a party strife that distracted the colony While he was governor, Hopkins had a controversy with William Pitt, prime minister of England, in relation to the contraband trade with the French colonies. He was one of the earliest and most strenuous champions of colonial rights against the encroachments of the English parliament. In 1765 he wrote a pamphlet entitled "The Grievances of the American Colonies Candidly Examined," which was printed by order of the general assembly, and reissued in London the same year In 1765 he was elected chairman of a committee appointed at a special town meeting held in Providence to draft instructions to the general assembly on the stamp act. The resolutions reported and adopted were nearly identical with those that Patrick Henry introduced into the house of burgesses of Virginia. In 1772 he was again elected to the general assembly. He was appointed a member of the committee on correspondence the following year, and was successively re-elected to the assembly till 1775. While holding a seat in the assembly, and afterward in the Continental congress, he filled the office of chief justice of Rhode Island as well, being appointed for the second time to that station in 1773. In 1773 he emancipated his slaves, and in 1774 brought forward a bill in the assembly which prohibited the importation of negroes into the colony. He was elected, with Samuel Ward, to represent Rhode Island in the general congress in August, 1774, and was appointed on the first two committees. In the beginning of the Revolution he was one of the committee of safety of the town of Providence, and in May, 1775, was elected to the 2d congress. In the 3d congress he had William Ellery as his colleague. The signature of Hopkins to the Declaration of Independence is written with a trembling hand for the reason that he had suffered for several years from a paralytic affection which prevented him from writing except by guiding the right hand with the left, though in early life he had been famed for the elegance of his penmanship. He was a delegate from Rhode Island to the commission that was appointed by the New England states to consult on the defence of their borders and the promotion of the common cause, and presided over the meetings in Providence in 1776 and in Springfield, Massachusetts, in 1777. He was not a member of the congress in 1777, but in the following year was elected for the last time. Mr. Hopkins was a powerful and lucid speaker, and used his influence in congress in favor of decisive measures. He worshipped with the Friends, but professed religious views so latitudinarian that he was called by his enemies an infidel. His knowledge of the business of shipping made him particularly useful in congress as a member of the naval committee in devising plans for fitting out armed vessels and furnishing the colonies with a naval armament, and in framing regulations for the navy. He was also a member of the committee that drafted the articles of confederation for the government of the states. In 1777-'9 he was an active member of the general assembly of Rhode Island. He was a founder of the town library of Providence in 1750, which was burned in 1760, but re-established through his instrumentality. Besides the work already mentioned, he was the author of a "History of the Planting and Growth of Providence," which appeared in the Providence "Gazette" in 1765, and was reprinted in the "Collections" of the Massachusetts historical society.

Start your search on Stephen Hopkins.