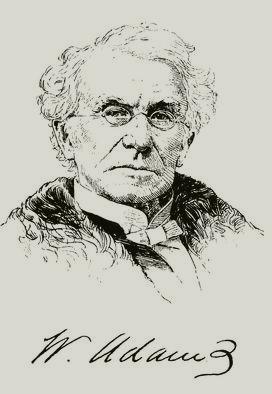 ADAMS, William, clergyman, born in Colchester, Connecticut, 25 January 1807; died at Orange Mountain, New Jersey, 31 August 1880. His father was John Adams, LL.D., principal of the Bacon academy at Colchester, whence he removed in 1810 to assume charge of the Phillips academy at Andover, Massachusetts. His mother was Elizabeth Ripley, a lineal descendant of Governor Bradford. He was prepared for College at Andover and was graduated at Yale in 1827, counting among his classmates Horace Bushnell, Henry Durant, Judges Edwards, Hageboom, Gould, and Welch, and N. P. Willis. He studied for the ministry at Andover theological seminary, under Professor Moses Stuart, on whom he delivered a memorial discourse in New York 25 January 1852. He was graduated in 1830, and in February 1831, was ordained pastor of the evangelical Congregational Church in Brighton, Massachusetts, where he remained until April 1834. In August 1834, he took charge of the Central Presbyterian Church in Broome Street, New York He was moderator of the new school general assembly at Washington in 1852. The University of New York gave him the degree of D.D. in 1842, and Princeton College that of LL. died in 1869. In 1853 his congregation founded the Madison square Presbyterian Church, whose pastorate he resigned in October 1873, after nearly forty years of consecutive service in one Church, to accept the presidency of the Union theological seminary in the city of New York, in connection with the professorship of sacred rhetoric and pastoral theology. He was instrumental in advancing the prosperity of that institution and giving it an assured independence. In 1871 he went as a delegate from the evangelical alliance to the emperor of Russia to secure liberty of worship to the dissenters from the Greek Church in the Baltic provinces, and succeeded in his mission. In the same year he acted as delegate from the general assembly of the Presbyterian Church of America to the general assembly of the Presbyterian Church of Scotland, and to the Free Church assembly. In 1877 he was a delegate to the general council of the Presbyterian Church in Edinburgh, responding to the address of welcome by the lord provost of that city. Dr. Adams's chief characteristic was a broad catholicity; he abhorred dogma and sectarianism. It was natural, therefore, to find him, from 1869 to 1871, a leader of the new-school branch of the Presbyterian Church, in the efforts to reunite the two divisions of that Church into one body, and he was chosen to address the old-school assembly that met in New York in June 1869, as the representative of this new-school branch. In the same spirit he delivered the address of welcome to the foreign delegates to the evangelical alliance, which met in New York, 3 October 1873, and the following passage there from shows his creed:" We meet to express and manifest our Christian unity. Divers are the names we bear both as to countries and Churches, German, French, Swiss, Dutch, English, Scotch, Irish, Lutheran, Reformed, Anglican, Presbyterian, Episcopalian, Methodist, Baptist, Independent, but we desire and intend to show that amid all this variety of form and circumstance there is a real unity of faith and life; believing, according to the familiar expression of our common Christian creed, ' in the Holy Catholic Church' and the communion of saints." On 5 October 1873, was held in his Church at Madison square a communion service in which representatives from every denomination and almost every nation on earth took part. Criticism having been made on the dean of Canterbury for assisting at this service, Dr. Adams published a reply that silenced all animadversions. As he opened the exercises of this alliance, he was chosen to close them at its final meeting in the Academy of Music. His last sermon was delivered 6 June 1880, before the graduating class at West Point. He was a personal friend of Daniel Webster, who always attended his Church when passing through New York. From a conference in his study, brought about by a sermon delivered on the duty of employers to their employees, sprang the Young Men's Christian Association of New York, and the many kindred associations. He was prominent in the council of the American Bible society, the American board of foreign missions, and the American tract society. He was president of the Presbyterian board of foreign missions, and for fifteen years president of the New York institution for the instruction of the deaf and dumb, a class of unfortunates in whom he took great interest. He edited the works of Robert Hall (4 vols., New York, 1830), and was the author of "The Three Gardens : Eden, Gethsemane, and Paradise" (1859); a biographical sketch of Isaac Taylor, prefacing the "Spirit of Hebrew Poetry" (1861)" "Thanksgiving, Memories of the Day and Helps to the Habit" (1865); "Conversations of Jesus Christ with Representative Men " (1868), and other works.

Start your search on William Adams.