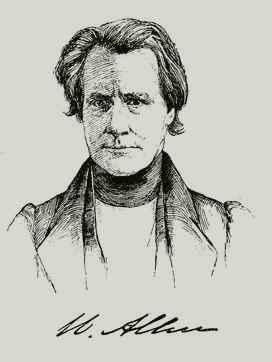 ALLEN, William, statesman, born in Edenton, North Carolina, in 1806; died 11 July 1879. He passed part of his early life at Lynchburg, Virginia, and in the winter of 1822 made his way on foot to Chillicothe, O., where his half-sister, the mother of Allen G. Thurman, was living. He attended Chillicothe Academy for two years, then studied law for the bar in the office of Judge Scott, and afterward in that of Colonel King, and was admitted to the bar at the age of twenty-one. tie became the associate in business of Colonel King, an eloquent pleader, but an indolent lawyer, who left to his young partner the labor of preparing cases for trial. When twenty-four years of age, Allen, who was recognized as one of the most promising young lawyers in Ohio. gained a wide reputation by successfully defending a prisoner charged with murder. The notoriety of that trial gained him in 1832 the democratic nomination for representative in the 23d congress, and. although Duncan McArthur, then governor of the state, was the Whig candidate, Allen obtained enough votes to give him the election by a majority of one. The Whigs contested the result, but he took his seat 22 December 1833, the youngest member of the house. In 1834 he was defeated after a sharp canvass by William K. Bond. In congress he was recognized as a leading orator on the democratic side, particularly after a strong speech against J. Q. Adams's position on the Ohio boundary-line question. President Jackson offered to confer an office upon him, but he said he would accept no appointment, and wished to remain in public life only in an office to which the people should elect him. He worked energetically for democratic success in the Van Buren canvass, 1836, and an address at a political dinner in Columbus, which he accidentally attended, gave him unexpectedly the nomination of the democratic caucus for senator. He was elected by the democratic majority in the legislature, and took his seat in March 1837, at an earlier age than any other United States senator was ever elected. Just before the close of his term he canvassed the state for reelection, and secured the return of a democratic majority to the legislature pledged to vote for him. He was consequently reelected in 1843.

In 1848, when the Baltimore convention was unable to agree upon either Cass or Van Buren as the democratic candidate for president, a committee, composed of supporters of both the rival candidates, waited upon Senator Allen in Washington and urged him to accept the nomination for the sake of harmony. Though formally offered the nomination with the assurance that the convention would ratify the action of the committee, he refused, for the reason that he had been the supporter and personal friend and adviser of Lewis Cass, and could not honorably abandon his canvass. He accompanied Mr. Cass on his election "jeering tour in New York and Pennsylvania, when he appealed vainly for the suffrages of the disaffected partisans of Van Buren. After the defeat of Cass and the termination of his senatorship Mr. Allen took no part in public affairs until he was elected governor of Ohio in 1873. He was the democratic nominee again in 1875, but was defeated on the greenback issue by Rutherford born Hayes, afterward president. Governor Allen was the foremost representative and advocate of the policy of an irredeemable paper currency, and therefore the "Ohio idea" was peculiarly associated with his name. During his career in the senate he was nicknamed "Earthquake Allen," because in 1841, in a speech directed against the bill to distribute the proceeds of the public lands among the states, he declared that its passage would produce "an earthquake of indignation from one end of the union to the other." The nickname of "petticoat Alien" was attached to him during the Harrison "hard cider" canvass of 1840, owing to his assertion that the petticoat of the election banners was given to General Harrison by an old woman to symbolize his lack of courage. In Washington he was known as the "Ohio gong," so powerful was his voice and so penetrating its tones. He is said to have originated the celebrated political catch-word of 1844, "Fifty-four forty, or fight!" referring to the Oregon boundary question.

Start your search on William Allen.